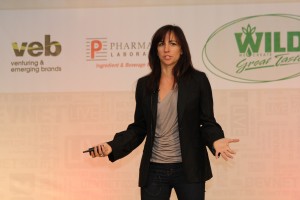 Amy Taylor, the VP/GM, Red Bull North America East, will add her views and observations to a panel on the role of culture at successful entrepreneurial beverage companies during this summer’s BevNET Live event.

Ms. Taylor, who was previously VP Marketing, Red Bull North America, was a featured speaker at BevNET Live in December, 2011, discussing the role of earned media in brand building.

During the summer’s BevNET Live, taking place on June 4 and 5 at the Metropolitan Pavilion, Ms. Taylor will join Vita Coco CEO Michael Kirban, Food Should Taste Good founder Peter Lescoe, and Sambazon CMO Greg Fleishman in the event’s final panel — a conversation on the roles that a distinct culture can have on its ability to grow and thrive.

With more than 8,000 employees, Red Bull is by far the largest and best established company represented on the panel. But the Red Bull culture remains infused with a highly entrepreneurial and experimental spirit and the company’s ethos continues to be expressed via its risk-taking marketing partnerships, which support a mission to “give wings to people and ideas.” The idea that it can continue to do so even at such a large scale is one that will undoubtedly be cited as an inspirational example — and operational lesson — throughout the discussion.

BevNET is delighted to welcome Ms. Taylor back to the BevNET Live event to further boost the aims and ideas of BevNET’s community of entrepreneurs.

Ms. Taylor is VP/GM, Red Bull North America East. From 2007 to 2012, she served as VP, Marketing for Red Bull North America, with responsibility for the brand’s overall strategic marketing and positioning in North America. Prior to her current role, Amy held several field and HQ positions across sales and marketing at Red Bull.  She also logged about a decade in sports marketing, holding positions with the National Basketball Association’s Atlanta Hawks and producing events for the Atlanta Committee for the Olympic Games, among others.

BevNET Live is a two-day forum for beverage entrepreneurs, suppliers, distributors, retailers and investors to gather, speak, exchange ideas through interactive panels and lectures, and enhance their marketing and product development strategies. Attendees can tap the expertise of investment professionals who can help groom them to attract money, business owners with inspiring success stories, and the BevNET.com community, which has spent a decade dedicating itself to careful reporting on the fast-moving beverage industry. More than just a conference, BevNET LIVE includes networking options including the BevNET LIVE Expo, beverage breaks, a cocktail reception and more.