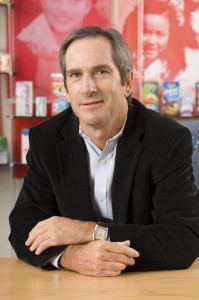 Increasing distribution is one thing, but doing so without creating consumer pull can lead to the disastrous “Boom-Splat!” phenomenon, a term coined by Deryck van Rensburg of VEB a few years ago. One company that has assiduously avoided the Boom-Splat! is GoodBelly, a line of probiotic drinks started by WhiteWave pioneers Steve Demos and Todd Beckman and run by CEO Alan Murray.

Since hearing van Rensburg describe the phenomenon, Murray says, he has lived by the mantra: distribution is good, consumer demand is better — and both together is best.

“On the outside we are a quirky, fun brand, that takes the benefit of the product seriously (digestive health) but doesn’t take itself too seriously,” Murray said. “But behind that is a fanatically focused marketing effort that measures everything we do.  If it works, we refine and improve and scale the program, but if we can’t measure the ROI, it’s out.  We’re simply too small to waste money on feel-good marketing efforts that can’t show a proven return”

It has worked for GoodBelly, which has seen steady, impressive growth in the six years since its founding and has moved to a 20 to 30 percent growth rate over the past three, leading to continued investment from private equity funds, a gradual ubiquity in natural channels, and a growing presence in conventional ones.

Underlying that growth has been a potent focus on consumer acquisition — a strategy based on the idea that the cost of building a devoted consumer is one that has long-term value and can lead to a high return on that investment.

During a talk at BevNET Live in Santa Monica, Murray will describe for the BevNET audience the ways he worked to prepare GoodBelly to enact that strategy, and help attendees understand the key elements that can allow them, too, to align their marketing and distribution efforts in an attempt to avoid the Boom-Splat!

NextFoods CEO Alan Murray has worked with the beverage industry for more than 20 years, having held various international marketing and general management roles within packaging giant Tetra Pak.  As CEO in North America, he worked closely with many leading beverage brands and played a key role in bringing new packaging formats to the U.S. In 2010 he decided to step into the startup world by taking on the CEO role at NextFoods, makers of probiotic juice, GoodBelly.  Murray was instrumental in licensing the brand’s patented probiotic technology from Sweden and participated in early activities such as brand creation and pitching to investors.

Murray is also Vice Chairman of the publicly listed company SunOpta, a $1 billion global provider of natural and organic foods ingredients.  His experience includes board work for private equity and venture backed companies in the packaging and food industries.  He has worked closely with CEO’s as coach and sounding board in companies ranging in size from pre-revenue all the way to  $1billion. He was the founder of the North American Carton Council, an industry body that serves to promote the recycling of cartons in the US.

A graduate of the University of Cape Town, South Africa with a degree in Biochemistry and Applied Statistics, Murray participated in the Unilever Management Development Program and has attended various courses at the Business School IMD in Lausanne Switzerland.  He is a Guest Speaker at the University of Michigan Ross School of Business and has taught case studies of his work at London’s Ashridge Business School.