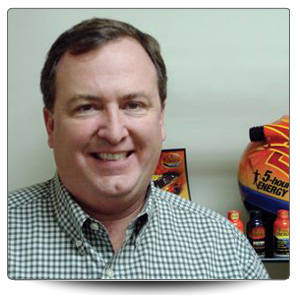 As the former owner of a micro-brewery, Scott Henderson knows a thing or two about the beverage business. But he also knows what his job is at Living Essentials, which the veteran executive joined in 2006, just a couple of years after the company first formulated 5-Hour Energy. And it isn't micro-brewing. "We just go out there and sell," he says.

And since Henderson came on board, that's all that Living Essentials has done, to the tune of nearly $50 million in advertising this year, all designed to extend the company's first-mover advantage in the energy shot category. This is the year things took off for energy shots in general and 5-Hour in particular, and it owes largely to Living Essentials' recognition that it had the right product and the right time slot in which to sell it. With a steep upward arc in sales across the category and competition from mainstream companies coming to play, Henderson nevertheless says he doesn't imagine fortunes changing for Living Essentials in the near future.

"Having the 'Big Boys' in means two things," he said. "On the one hand, they are worthy competitors. But on the other hand, it validates the company and what we've been doing."