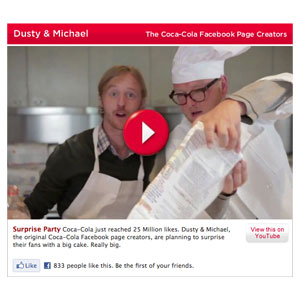 For BevNET's Best of 2011 award for best social or interactive marketing, the panel chose the campaign promoting the Coca-Cola Freestyle fountain.

The campaign for the Coca-Cola Freestyle, which is a unique on-premise soda delivery system that allows consumers to build custom tailored beverages, was spearheaded by two very clever digital applications. The first was an iPhone app, which, using the same interface as a Freestyle machine, takes users through a classic memory game. The second was a Facebook application that used the same interface as the Freestyle machine to allow page visitors to build their own virtual drink.

Both of these efforts have helped Coca Cola create excitement and build an \"insider\" group of fans who have their own attachments to the machine in much the same way as visitors of In-N-Out Burger on the West Coast have their own language for their orders. For creating a following online that is actually translating into concrete usage offline, the Coca-Cola Freestyle campaign is the winner of best social or interactive marketing.