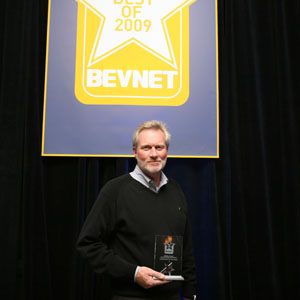 This is a weird moment because we’ve given out innovator of the year three times and we’re about to give it to someone who has already won it. But when it comes to innovation, Mark Hall and Monster Beverage have had a banner year. Monster has always been innovative. It’s played with can sizes, with mixtures like juice or coffee or tea, with flavors that haven’t ever really previously occurred in nature. This year, however, Monster introduced a suite of products that really knocked us out.First, they took the step of making a Monster that you could re-seal in a way that kept it fizzy days later. Monster Import’s can is, in that respect, a huge step forward for multi-serve beverage containers. The fact that the taste is new and interesting is almost secondary. Next, they’ve gone so nuts that they’ve altered the very chemical structure of a carbonated soft drink, using nitrous oxide in two new product lines. Nitrous Monster. Monster X-presso. That’s fun stuff, right there. Yes, the company reached new peaks of revenue and profitability last quarter. Yes, there are some hiccups along the way – lawsuits, pr issues. But we are once again overwhelmingly impressed. Hall and company have managed to find new ways to innovate when almost every flavor, design, and market niche has been flooded with products. They did it in the midst of a recession, and they did it with Monster’s edgy approach to fun still in place. So, in other words, they did it again.