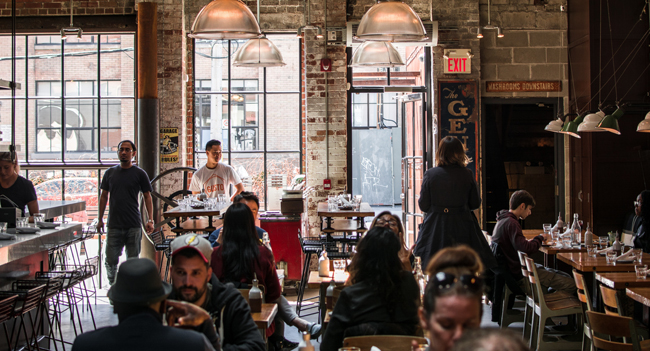 Being privileged to be one of the remaining working stiffs whom our ruling class of absentee billionaires still allows to reside in Manhattan, I often like to reward myself after eking out another issue of my newsletter, Beverage Business Insights, with a restorative bike ride around my beautiful city. Often enough, my pedaling takes me across Central Park and over to a preferred East Side craft beer bar like Pony Bar, or, if I’m feeling more ambitious, through the park and over the 59th Street Bridge to a Long Island City craft brewery like Big Alice or Transmitter. Sometimes, feeling like a more bucolic experience, I cross the park and then head north through Randall’s Island along the beautifully landscaped paths that wend their way around the insane asylum, homeless shelter, wastewater treatment plant and fire academy, with the Bronx Brewery as my destination. Along the way, I make sure to keep my ears attuned to all the chirping, of birds and other Randall’s denizens.

The other day my wife observed, “So, always beer, huh?” Her grievance seemed to be that I may be a couple of tulip glasses into it before she gets back from work to join me. So I decided to mix it up. After my colleagues hit SEND on another BBI that week, I jumped on my bike and pedaled across Central Park, this time to the Upper East Side location of Irving Farm Coffee Roasters, where I found the late afternoon light pouring through the windowed front wall, giving the expansive space a silvered light that I recall from visits to cathedrals. I ordered a draft cold-brewed coffee and found a spot near the communal table in the front seating area. On this visit, being in bar mode, I decided to keep my computer in my bag. There was mellow, sort of trippy music on the sound system. The other patrons were sociable and relaxed, just like at Pony Bar or Bronx Brewery. The taste of the cold-brew was so rich and delectable that it was easy to nurse it for half an hour, gabbing with other patrons about bike-sharing and the mayor’s feud with the governor and one of those absentee billionaires, Trump (though it turned out none of us believed he’s really a billionaire).

It soon enough dawned on me that this restorative, very enjoyable experience was precisely what I look forward to at a bar – minus the beer. As I thought about the matter, I realized that some of the burgeoning new categories of non-alcoholic beverages – I’m thinking particularly of cold-brewed coffee, kombucha, drinking vinegars and some of the newer cocktail alternatives hitting the market – are disrupting some of the fundamental occasions that drive our beverage consumption choices. Judging by the elaborate slides they show at conferences, many of the big CPG players use consumption occasions as the lens through which they try to analyze and foster innovation; it occurred to me that this blurring of once-discrete consumption occasions could be yet another reason they seem kind of freaked out lately about what’s going on in the beverage category.

Think about it. For those who may not be interested in imbibing – whether permanently or just on some occasions – the rich environments and product offerings of third-wave coffee shops (and the Starbucks’ Reserve bars that mimic them) can be pretty equivalent. In fact, I know people who do like beer but still prefer the less boisterous, more conversational ambience of coffeehouses: for them, the growing number of coffeehouses that offer beer and wine are ideal. We’re similarly seeing an expansion of teahouses, with a somewhat different vibe, and we’re starting to see kombucha taprooms pop up here and there. On a trip to Orlando, Fla., earlier this year I ventured into one called Humble Bumble Kombucha whose low-key, friendly vibe and emphasis on the craftsmanship of the brews made the experience almost indistinguishable from being in a craft brewer’s taproom. As for the craft brewers, increasing numbers pour kombucha at their taprooms, and some are melding brewing and coffee-roasting activities under the same roof, as I encountered last December at a skilled operation called Red Horn outside Austin. At some point not too far off, marijuana smoke shops will become another fixture in the landscape, further blurring the occasion options, as well as the minds of their patrons.

There are all kinds of permutations to this thinking. I think London-based Distill Ventures is on to something in its efforts to incubate alcohol alternatives like Seedlip, with its focus on the theatre of the pour, complex flavors and a heavier mouth feel that require the drinks to be sipped not slugged, and a crafted production process like distillation, fermentation or reduction that drinkers will want to talk about. They turn things up another notch over the boutique sodas and mocktails and bottled waters that had been the best non-drinkers could do in on-premise environments.

But this trend goes beyond the on-premise experience. For example, I believe there’s near limitless upside for cold-brewed coffee in another immediate-consumption channel: convenience stores. It may not have sunk in yet to c-store operators, but at some point they are going to realize that cold-brew is starting to exert a powerful lure on millennial consumers and the teens coming up behind them. The best ones are authentic, all natural, very flavorful and if black, lacking sugar or calories. In other words, they deliver on all the cues of that c-store mainstay, energy drinks, without any of the negatives. By now, among younger consumers, some of them seem to be perceived as way cooler than Red Bull or Monster. So maybe we’ll soon have to count that as another category that’s been greatly disrupted by a nascent set of products that comfortably slip into a longstanding, seemingly unalterable consumption occasion.