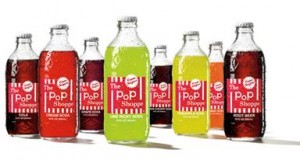 January 23, 2011 – Portland, OR – The PoP Shoppe today announced the launch of a new, premium lineup of their iconic sodas, now made with pure cane sugar. The reformulation marks the first-ever change to The PoP Shoppe’s product lineup since its inception in 1969.

Created in response to customer feedback to remove high fructose corn syrup from their eight flavor lineup, The PoP Shoppe’s Cane Sugar sodas are now available throughout the US. Alger plans to launch the new Cane Sugar line in Canada in late 2012.

The PoP Shoppe puts a smile on the faces of millions who remember PoP Shoppe stores and their tasty sodas from the 70’s and 80’s. With its “stubby” glass bottles and vast flavor offerings, the beloved brand is back and making an aggressive comeback across the US with its flavor lineup – Cream Soda, Lime Ricky, Black Cherry, Root Beer, Orange, Grape, Pineapple and Cola.

The PoP Shoppe story began in 1969, when two Canadian entrepreneurs began selling soda, in a unique variety of flavors, at independent PoP Shoppe retail outlets. Customers would return their empty bottles each week in recognizable, red PoP Shoppe-branded crates, for a refund, and then pick-up fresh bottles for their families. Over the next several years, The PoP Shoppe was operating over 1000 stores in North America.

In the early 1980’s, The PoP Shoppe closed its doors, largely due to competition from private label grocery brands. In 2004, businessman Brian Alger re-launched The PoP Shoppe brand and today, The PoP Shoppe is Canada’s best-selling premium soft drink and is available across the US.

For more information on The Pop Shoppe, visit their Webby-winning website www.ThePoPShoppe.com