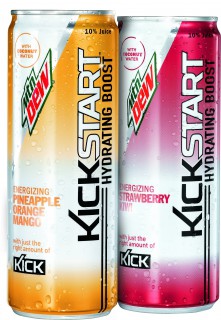 While its acquisition of O.N.E. Coconut Water is bearing less fruit that PepsiCo might have expected, the soda and snack giant nevertheless sees continued opportunity for coconut water, having added it as an ingredient in the latest line extension for Mtn Dew Kickstart. Pepsi today introduced the two new Kickstart varieties — Pineapple Orange Mango and Strawberry Kiwi — billing the drinks as “an energizing blast of DEW with real fruit juice, coconut water, and just the right amount of kick.”

The launch of the new beverages is not entirely unexpected. In November, PepsiCo chief marketing officer Simon Lowden told The Street that the company would be adding coconut water as an ingredient across several of its brands, though Mountain Dew was the only one named at the time.

This isn’t the first time a company has tested the waters of combining the seemingly disparate categories of coconut water and energy drinks. In 2011, Rockstar Energy introduced a coconut water energy drink, marketing its 10 percent coconut juice and energy drink blend as “Energy + Hydration.” The following year the company attempted to revamp the drink under the name “Rockstar Rehab,” but has since discontinued the product.

Mountain Dew’s full press release can be found below:

To kick-off the launch and show DEW Nation how everything gets pumped up when you crack open a can, Mtn Dew Kickstart will premiere its “Come Alive” television commercial, featuring “Out The Speakers Feat Rich Kidz” by A-Trak and Milo & Otis and So You Think You Can Dance alum D-Trix, during the Super Bowl XLIX Pre-Game Show.

“Mtn Dew Kickstart has been a huge success since it launched two years ago and we’re continuing to build the portfolio with the addition of two new flavors – Pineapple Orange Mango and Strawberry Kiwi,” said Greg Lyons, Vice President of Marketing at Mountain Dew. “Mtn Dew Kickstart is the ultimate beverage to get guys charged for whatever adventure they are taking on – big, small, every day or epic.”

The “It All Starts with a Kick” campaign will reach DEW Nation all across America by way of a comprehensive marketing campaign, including:

Visit MountainDew.com/Kickstart or Facebook.com/MountainDew for more information and join the conversation at @mountaindew by using hashtag #Kickstart.

About PepsiCo
PepsiCo products are enjoyed by consumers one billion times a day in more than 200 countries and territories around the world. PepsiCo generated more than $66 billion in net revenue in 2013, driven by a complementary food and beverage portfolio that includes Frito-Lay, Gatorade, Pepsi-Cola, Quaker and Tropicana. PepsiCo’s product portfolio includes a wide range of enjoyable foods and beverages, including 22 brands that generate more than $1 billion each in estimated annual retail sales.

At the heart of PepsiCo is Performance with Purpose – our goal to deliver top-tier financial performance while creating sustainable growth in shareholder value. In practice, Performance with Purpose means providing a wide range of foods and beverages from treats to healthy eats; finding innovative ways to minimize our impact on the environment and reduce our operating costs; providing a safe and inclusive workplace for our employees globally; and respecting, supporting and investing in the local communities where we operate. For more information, visit www.pepsico.com.