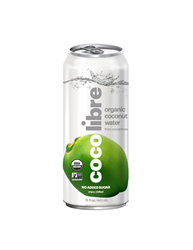 CULVER CITY, CALIFORNIA (PRWEB) FEBRUARY 12, 2016–Coco Libre, the maker of coconut water beverages with a purpose, is proud to announce their participation in Red Carpet Events LA GRAMMY’s Style Lounge Event. Coco Libre will offer musicians and celebrities the company’s signature Organic Coconut Water, a delicious and healthy way to stay hydrated before the big event. The invitation-only gifting suite, held this year at the W Hollywood Hotel, has become a pre-show “must” for GRAMMY attendees. The 58th GRAMMY Awards will air live on Sunday, Feb. 15, 2016, at 8 p.m., on CBS.

“We’re excited to introduce people to Coco Libre at an event that celebrates creative ambition,” said Candace Crawford, CEO of Maverick Brands, Coco Libre’s parent company. “At Coco Libre, we ask, ‘what do you thirst for?’ That question—waking up your ambition to make something new—is the start of so much greatness in the world. That’s what Coco Libre is all about. Making beverages that help people reach for more.”

The recording industry’s most prestigious award, the GRAMMY, is presented annually by The Recording Academy. A GRAMMY is awarded by The Recording Academy’s voting membership to honor excellence in the recording arts and sciences. It is truly a peer honor, awarded by and to artists and technical professionals for artistic or technical achievement, not sales or chart positions. The annual GRAMMY Awards presentation brings together thousands of creative and technical professionals in the recording industry from all over the world. See full GRAMMY Award coverage on GRAMMY.com.

Coco Libre’s flagship Organic Coconut Water is the nutritional foundation for a growing family of purposeful beverages. Coco Libre is a 2015 NCW Eco-Excellence Award winner and a finalist for Best New Product Line Extension at the World Beverage Innovation Awards 2014. Coco Libre beverages are available in grocery, natural, specialty and online retailers in the U.S. and Canada. To learn more visit CocoLibreOrganic.com, Facebook.com/CocoLibreOrganic, twitter.com/CocoLibre and Instagram @CocoLibre. Liberate your thirst.™