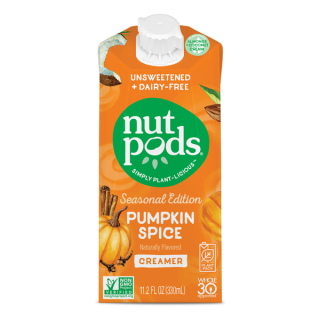 SEATTLE — nutpods, one of the fastest-growing natural food brands in the country, has achieved yet another milestone in its mission to convince consumers to rethink their coffee ritual. While it is still summer weather in most of the country, the breakout almond and coconut blend creamer company released its first of three seasonal flavors, “Pumpkin Spice,” responding to the requests of their loyal fans. Within hours it became the #1 Best Selling grocery item on Amazon.com indicating that, no matter the weather, nutpods drinkers are getting into the autumnal spirit earlier than ever this year.

“We had high hopes for Pumpkin Spice, but the reception has been amazing,” said nutpods Founder and CEO Madeline Haydon. “We listened to our fans who asked that we re-introduce Pumpkin Spice earlier this year. We did and they really responded.”

This online sales success is especially exciting as nutpods is rapidly expanding into traditional food channels including Whole Foods, Sprouts and Kroger allowing even more people to discover the delicious plant-based creamer.

“Consumers are always pleasantly surprised to learn that our entire line is unsweetened yet still rich, creamy and very flavorful,” said Haydon. “I can’t wait to see the reaction to our upcoming launch of two new seasonal flavors: Peppermint Mocha and a surprise flavor launching before Halloween (hint).”

nutpods is the first food brand from Green Grass Foods Inc., an independent, natural foods manufacturer based in Seattle, Washington, dedicated to introducing dairy-free products from plant-based ingredients. Introduced in 2015, nutpods has quickly found a loyal consumer base with Whole30, paleo, keto, vegan and vegetarian consumers who appreciate a high-quality, plant-based creamer in their coffee and tea, and as a versatile ingredient in sweet and savory recipes. nutpods is sold at retail locations nationwide as well as online. Visit www.nutpods.com for more information.