by Hain Celestial Group, The

Announced earlier this month, BluePrint’s latest offering is a line of tea-infused energy drinks, which are launching in three varieties with an SRP of $2.99.

As far as organic beverages go, these products are not short on on-trend ingredients. Each flavor uses a different base, including varieties with guayusa, yerba mate, and matcha (the only one that is actually derived from tea). They are accented with some slightly more bleeding edge ingredients, including moringa for the Matcha Tea, Lion’s Mane Mushroom for the Yerba Mate, and Turmeric (a somewhat pedestrian enhancement compared to the other two) for the Guayusa. 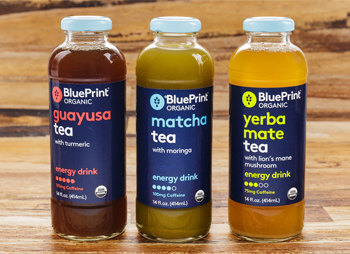 Taste testing each of the three flavors, we were left with mostly positive impressions. The products use a high quality list of ingredients, including maple syrup as the sweetener and lime or lemon juice for acidification.. You won’t find any flavorings, either, as spices and extracts are specifically listed as ingredients. And each of the three flavors has clean,freshly made taste.. We were most fond of the Guayusa, which has a nice zing from the turmeric, and the Matcha, which has a really enjoyable lemongrass finish. However, given that each type of tea only comes in one flavor (as opposed to BluePrint just focusing on one), we’re left feeling as though none of these flavors are really able to called best of breed.

That last point is a theme that carries over into the branding and positioning. This starts with the packaging, which is a 14 oz. glass bottle that has a label covering more than half the available real estate. It’s fine-looking bottle, although it doesn’t have the same super premium vibe that their HPP juices do. But it does definitely scream “Organic,” which is one of its key differentiators as far as RTD beverages go. The design otherwise feels a bit too matter-of-fact to us, which has worked on their juices, but seems somewhat against the grain in the RTD tea space.

Design considerations aside, the juxtaposition of “organic” and “energy drink” feel like they work against one another, especially with the amount of space dedicated to the latter. They’ve not only placed “energy drink” almost in the middle of the label, but they’ve also added the caffeine content and, for lack of a better way to describe it, caffeine meter that consists of five circles (all of the drinks, which range from 75mg - 100mg of caffeine, rate as either a 3, 4, or 5). If you look at other brands in the space, say Runa in guayusa or Guayaki in yerba mate, they’ve all figured out how to work “energy” into the equation, but “energy drink” has never been a successful way to market a non-carbonated tea drink. Our point is that BluePrint is likely to go through the same evolution that everyone else has.

Overall, we really like the notion of BluePrint spreading its wings into other organic beverage categories -- and it certainly makes sense when they are ancillary to Hain Celestial’s core tea business. However, this product line feels like it’s missing something to really stand out from the competition. Right now, it feels like it could easily blend in with the pack.