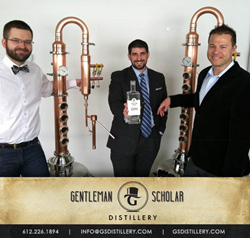 Minneapolis, MN (PRWEB) January 16, 2015 — While the process for launching a craft brewery has been streamlined in recent years thanks to efforts by legislators across the country and decades of lobbying, launching a craft distillery is a daunting challenge for those just starting out. Jon Bohlinger and Jesse Griffin met the challenge, and two years after starting out are finally firing up their stills.

Craft distillers differ from craft brewers by the products they produce – spirits like vodka and gin instead of beers. Many Minnesota farmhouses used to house a still, but after prohibition the process to get licensed became prohibitively complex for all but the largest – and richest – producers. It was only after the passage of the 2012 Surly Bill that small companies like Gentleman Scholar Distillery could begin to make product again. “Craft distilling is the freedom to experiment,” said Griffin, “We can use local ingredients, ambitious flavors, and handcraft each batch.”

Getting the paperwork in order to launch a craft distillery is not for the faint of heart. There are multiple layers of federal, state, county, and city laws to work through to get to launch. “We got into this to make spirits, but it turns out what we really make are roads,” jokes Bohlinger, referencing the substantial amount of government fee revenue generated by the industry, “But it’s really worth it to get to live the dream.”

Griffin and Bohlinger grew up together in Columbia Heights, not far from where their modest distillery is now located. Bohlinger conceived Gentleman Scholar Distillery in early 2013, and he quickly recruited Griffin as a partner. Soon after, the two met Kevin Burkart, a Savage, MN businessman who shares their vision, at an Entrepreneurs’ Organization rally.

Gentleman Scholar Distillery was founded in Minnesota in 2013 and began distilling in 2014. From the start the team wanted to make products of the highest quality knowing that the people of Minnesota expect a higher standard of spirit. Thus was born the promise – Spirits of Character for People of Distinction. Every vodka gimlet, every gin and tonic, and every martini made with our spirits reflects this promise.