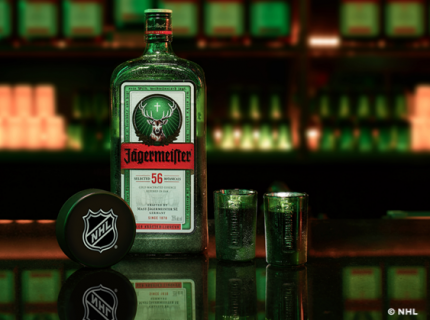 NEW YORK, N.Y. — The National Hockey League (NHL) and Jägermeister have entered into an agreement in which Jägermeister will become an official partner of the NHL in the U.S with the designation of “official shot of the NHL.” As part of the partnership, Jägermeister will create compelling and engaging 360-degree, integrated programs that will be supported across various retail, in-venue and on premise channels as well as consumer activations at the NHL Winter Classic, the NHL All-Star Weekend and other NHL marquee events. This collaboration allows consumers and hockey fans alike the opportunity to partake in shared, ice cold moments with premier brand integration and exposure.

In addition to Jägermeister’s partnership with the NHL, the Dallas Stars, Nashville Predators, Tampa Bay Lightning, Vegas Golden Knights and Washington Capitals will also join the brand’s roster of local NHL team sponsorships. Prior to launching a league-wide partnership with the NHL, Jägermeister introduced local partnerships with the Colorado Avalanche and New York Rangers during the 2017-18 season that will continue this season. With this new NHL partnership, Jägermeister strives to find continued success by reaching the NHL’s highly-engaged fanbase, further reinforcing that Jägermeister is the go-to shot in sports and big social moments.

“At Jägermeister, we strive to engage with our fans in unique ways by offering one-of-a-kind experiences, especially in the sports world,” said Chris Peddy, Mast-Jägermeister U.S. Chief Marketing Officer. “As the official ice cold shot of the NHL, our fans will enjoy the ice cold herbal liqueur they love with the unparalleled experience of the NHL.”

“Jägermeister is an innovative brand that will deliver our fans unique activations at retail and on-premise, as well as through our broadcast and digital channels, ultimately bringing our fans closer to the game,” said Jason Jazayeri, NHL Director of Business Development. “We look forward to working with Jägermeister to bring rich and exciting experiences to our fans on and off the ice.”

As the official shot of the NHL, Jägermeister – the number one imported liqueur – will host a variety of events, media and hospitality programs throughout the 2018-19 NHL season. Jägermeister will return as the presenting sponsor of the Stanley Cup Playoffs Bracket Challenge, the NHL.com initiative that enables the most passionate fans in sports to predict each and every series of the Playoffs through the Stanley Cup Final.

Introduced more than 80 years ago, Jägermeister, German for “Master Hunter,” is the #1 selling imported liqueur in the United States. Ranked 9th by Impact International’s definitive Top 100 Premium Spirit Brands, this herbal liqueur is one of the most successful premium brands worldwide and available in 135 countries around the world. Jägermeister Liqueur is 35% Alc./Vol. and imported exclusively by Mast-Jägermeister US, Inc., White Plains, NY. Visit www.jagermeister.com and follow @JagermeisterUSA on Facebook, Twitter and Instagram. DRINK RESPONSIBLY

The National Hockey League (NHL), founded in 1917, consists of 31 Member Clubs, each reflecting the League’s international makeup with players from more than 20 countries represented on team rosters, vying for the most cherished and historic trophy in professional sports – the Stanley Cup. Every year, the NHL entertains more than 670 million fans in-arena and through its partners on national television and radio; more than 151 million followers – league, team and player accounts combined – across Facebook, Twitter, Instagram, Snapchat and YouTube; and more than 100 million fans online at NHL.com. The League broadcasts games in more than 160 countries and territories through its rightsholders including NBC/NBCSN and the NHL Network in the U.S., Sportsnet and TVA in Canada, Viasat in the Nordic Region and CCTV and Tencent in China. The NHL reaches fans worldwide with games available online in every country including via its live and on-demand streaming service NHL.TV. Fans are engaged across the League’s digital assets on mobile devices via the free NHL App; across nine social media platforms; on SiriusXM NHL Network Radio; and on NHL.com, available in eight languages and featuring unprecedented access to player and team statistics as well as every regular-season and playoff game box score dating back to the League’s inception, powered by SAP. The NHL is committed to building healthy and vibrant communities through the sport of hockey by increasing youth participation and engagement; fostering positive family experiences; promoting inclusion, positive culture and leadership; and supporting sustainable community impact.