OK, even a beverage geek like myself will admit that the deal Coca-Cola and Monster Beverage recently announced may not quite rise to the status of those momentous “where were you when it happened?” events – though in my case the answer is, “right in the middle of my week of summer vacation,” insuring that I (and my family!) will remember it a long time. Thanks, Coke. Thanks, Monster. Still, it’s an extraordinary transaction, on many grounds. Beyond its general outlines, I wonder whether you realize quite how extensive the ramifications may be? 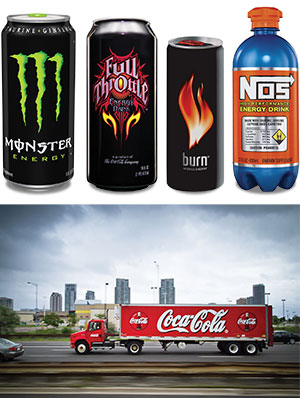 To briefly summarize the deal, Coca-Cola, which has distributed Monster Energy in about half of the U.S. and in several overseas markets, spends $2.15 billion to acquire a 16.7 percent stake in the company, with the right to gradually take this up to 25 percent. In the process it becomes Monster’s “preferred” global distribution partner, meaning the companies now will terminate the Budweiser wholesalers who manage the brand in the other half of the U.S. and seek, wherever optimal, to ride the Coca-Cola bottling network into overseas availability, with China the top priority. The deal also includes a massive brand swap: Coke cedes its energy drink portfolio to Monster, including the likes of Full Throttle, NOS and Burn, while Monster sends to Coke its non-Monster brands, several of which, under the Hansen’s name, go back to the inception of the company decades ago. That portfolio includes the Peace Tea brand that Monster (and its AriZona alumnus Mark Hall) devised expressly for Coke as a deftly branded alternative to an AriZona Iced Tea line that Coke has long coveted.

Those of you who read my newsletter, Beverage Business Insights, will know that by now we’ve teased out a dozen or more threads that make this deal fascinating. For the rest of you, I’ll spotlight just a few.

Coke’s strategy seems novel on several grounds. Unlike the case with brands like Honest Tea, Zico Coconut Water and even Keurig Green Mountain, where Coke initially took a minority stake in a relatively undeveloped brand and left the entrepreneurs relatively unfettered to continue to build their business, the Monster Energy brand has had a run of over a decade now, in a pretty mature category dating back in North America to 1997, when Red Bull launched here. So Coke’s hands-off strategy is not an incubation ploy. Rather, the company seems to be implicitly acknowledging that, in segments outside its core CSD competency, even mature brands in mature categories may be better off in the hands of inspired marketers who’re immersed in the particular dynamics of the category. (Coke reaps an ancillary benefit in somewhat shielding itself from the criticism on safety grounds that energy drinks have reaped in some quarters, though I seriously doubt Coke would have done this transaction if it thought there were any skeletons in that closet.) On the energy side, Coke has proved a good steward of the NOS energy brand it acquired as part of Fuze Beverage, but its main, internally devised U.S. play, Full Throttle, has never been particularly convincing as a brand. Now it’s left to Monster to sort out these brands’ roles and devise the marketing to support them. So the inmates will be running the asylum, which I mean as a compliment.

It’s interesting strategically for Monster, too. It dispels the notion that, in setting up Coke and Budweiser as rival distribution partners, Monster Beverage’s honchos Rodney Sacks and Hilton Schlosberg had been a bit too clever and ended up not with two ardent suitors but rather two partners with a concrete disincentive to elevate their partnership. The lesson here seems to be that if you run your business for the long term and create undeniable value, a serious suitor will emerge regardless. The deal is also a mildly embarrassing admission on Monster’s part that maybe the marketing genius it’s exhibited so consistently in energy drinks doesn’t really extend to the legacy categories within the company, the natural sodas, lemonades and teas that it’s devoted a fair amount of management attention to trying to ignite.

It will also be fascinating to see how the deal plays out on the execution front. In theory, it’s brilliant: each company doubles down on categories that are most familiar to it, in a partnership strengthened by the addition of an equity tie. And yet: there’s evidence that, to date, the Bud network that’s about to be terminated has out-executed the Coke network on Monster, meaning we’ll need to see a step-up in execution by the bottlers for this move to be vindicated. Coke’s move to refranchise the network to more agile outside partners should help, but that’s going to take a while. Monster’s energy drink rivals surely will be hoping that the brand sputters in the interim. Nor is it clear how much the non-energy brands will benefit from going over to Coke. It seems an obvious upgrade for Peace Tea, a natural fit within the bottlers, but it’s murkier for items like the glass-bottle Hubert’s Lemonade line or modest-selling Blue Sky sodas. All these caveats are in no way meant to deny that it’s a brilliantly conceived deal, only to stress that its ultimate success will depend heavily on execution.

Not least, there may be serious ramifications for the Budweiser beer network that’s about to lose the brand, and for beverage marketers who hope to cultivate that network as a channel for their own brands’ distribution. Once my colleagues at Beer Marketer’s Insights and I penciled in the arithmetic, we were surprised to see how reliant the Bud network has become upon the Monster brand for its profitability, at a time that their beer profits are under pressure. For many it’s 10 percent of their cash flow – for some, as high as one-third or even half. For those with major exposure to the departing Monster brand, this could actually trigger a decision to exit the business, hastening the network’s consolidation. For those who stay, it could prompt a stampede into other brands to replace that lost volume and profit. Craft beers and imports, surely, but NAs? Some wholesalers enjoying success with brands like Sparkling Ice and Jarritos could double down, but others may decide that, with their best NA brand gone, they’ve simply had enough of a segment in which brands flee at will, for paltry buyout prices that don’t approach the value the wholesalers created for the brand owner. That, too, could be a considerable aftershock.