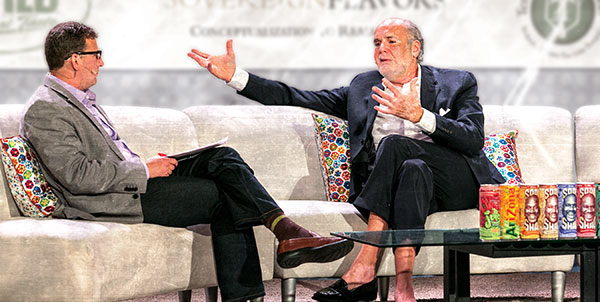 Probably like me, you’ve been too busy tending to your own beverage affairs to invest much time following that entangled soap opera involving the feuding co-founders of AriZona Iced Tea. That long-simmering dispute finally may be getting close to a resolution – possibly by the time you read this – which maybe makes this a good time to reflect upon an extraordinary pair of personalities and an extraordinary brand. Lurid elements of the dispute aside, the outcome may determine whether the biggest independent beverage company is able to continue operating that way.

The dispute basically involves equal partners whose priorities have drastically diverged since they launched the brand from facing desks in the dreary Flatlands section of Brooklyn. Don Vultaggio has been running the business on his own for more than a decade, and would like to continue doing so, particularly now that his two sons have gotten involved. John Ferolito has developed other interests and would like to liquidate his share of the company – say, by selling his stake to Coca-Cola, Tata or Nestle. The problem is that each partner holds veto power over the other’s decisions, and out of fear of losing control Don seems to have only half-heartedly pursued negotiations that might allow his partner an exit. Given the track record of similar alliances in the past, he’s probably right to be wary of any assurances suitors offer that he’ll retain a free hand. And working stiffs like you and me are unlikely to be too pitying of Ferolito’s plight, since he’s splitting $50 million or more in pretax profits with Vultaggio each year without shouldering any of the workload. Given the wealth the two have amassed by now, it’s hard to see what aspirations of Ferolito are being thwarted by his not being able to cash out yet, unless maybe he hopes to buy the LA Clippers. Still, he owns half the company, and if he wants to move on, he should be able to.

So after a lot of skirmishing inside and outside of courtrooms, it seems to be coming down to a Long Island judge setting a valuation on the company so that Don can buy out his partner’s share. Don’s hoping that figure comes in below half a billion, which should allow him to complete the buyout without having to rely too much (if at all) on outside investors or loans. If, as seems more likely, the judge concludes the company’s worth a couple of billion or more, that would provide more of a challenge. Even to Don, that won’t be pocket change. Knowing how often good brands go inert once controlled by larger firms, I’m pulling for Don to find a way to appease his partner’s wish to move on but continue to do his thing.

Partly that’s sentimentality speaking: it’s hard to overstate the deep imprint that brand has put on me, giving the timing of its launch, in early 1993, at precisely the time I’d made a mid-career switch from reporting on technology issues to marketing. Don and John and their brand represented a stark contrast with what I heard from the marketing pros I talked to most of the week as I tried to get a handle on this strange new discipline. The pros were accustomed to thinking in terms of above-the-line media, elaborate retail promotions and carefully considered packaging devised by sophisticated branding agencies.

Don and John, well, they thought different, to paraphrase the old Apple tagline. At a time mobile phones were still a novelty, they built retailer loyalty by driving bodega owners around in a rented limo, inviting them to call home overseas. They succeeded wildly with packaging that the experts deemed unproduceable (or in the case of the pastel-colored iced tea can, too recessive on the shelf). As both distributors and retailers in their earlier inner-city years, they’d learned to think in terms of price points and promotional gambits in a street-wise way I rarely heard from other marketers. Leery of paying the going rate for orthodox transit ads, the partners convinced the city bus system to let them paste large decals on the otherwise unused backs of the buses, inaugurating a new format used by other marketers since then. 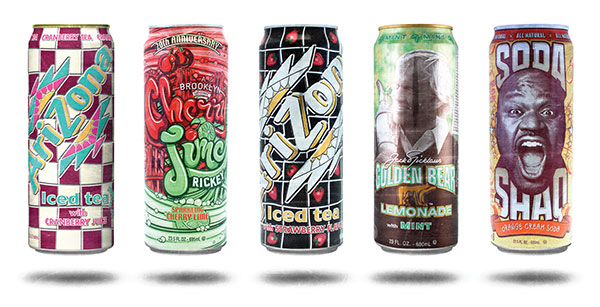 So who was right, the marketing experts, or Don and John? The experts warned me not to be dazzled by the brand’s early success: without any advertising or other marketing support, they predicted, those two guys would wake up in four or five years and realize they didn’t have a brand. It’s hard today to conclude that the experts didn’t get that one dead wrong. AriZona may not be a superpremium brand, nor an image brand in the mode of a Mountain Dew or Monster Energy, but it’s certainly proved to be an enduring brand. Ever since then, I’ve learned to cast a wary eye on marketers’ insistence that new beverage brands can only be built via classic branding techniques. In their own ways, such later hit brands as SoBe, Vitaminwater and Monster have all comprehensively violated those tenets. It’s made me question whether these rules are even relevant in the emerging-beverage space.

Though they’ve mainly operated behind the scenes, the two partners have also colored my view of the yin and yang required to launch a successful beverage. Now that he’s somewhat overcome his aversion to public appearances and the media, Don has emerged as an engaging raconteur, in a kind of rambling, tall-tale way. Arriving at the office in the afternoon and working into the evening, the lanky entrepreneur is a classic tinkerer, at the farthest reach from the “carpetbaggers” I sometimes lampoon, with their get-rich-quick-and-get-out ambitions for the beverage business. Vultaggio demands unquestioning loyalty from his employees and offers no equity in the company, yet seems to stoke a sense of common enterprise that allows him to retain valued staffers for long periods. His trade partners often don’t like him much, but they stick around too.

As often happens with successful entrepreneurial partnerships, John is a completely different personality from Don, a spunky, in-your-face, sometimes belligerent character, not someone with whom you’d choose to engage in a protracted feud. While active in the business, he showed a highly developed sense of the transactional aspect of beverages: what price points would spark a purchase while making money at each tier of the supply chain, which items you buy for your private consumption and which you buy to impress your friends. Though out of the picture in beverages for a long spell now, he seems to have retained his iconoclastic flair in business. Indeed, the last time I encountered him face to face, probably 15 years ago, occurred after he’d mentioned that he was hoping to recapture a passion for playing the guitar that he’d abandoned in his early 20s as the demands of building his business with Don took center stage. Did I know anyone who could help him buy a new guitar? It happened that I did, an amateur blues player who’d gotten involved in buying and restoring electric guitars as a hedge against the vagaries of his career as an architect.

So on a Friday afternoon, probably in 1999, Ferolito swung by my office in his Range Rover, my friend Tom and I jumped in, and we waded out into the Midtown traffic, on the way, it turned out, to a major auction at Christie’s. John registered us as bidders, mentioned an interested in D’Angelico archtop guitars in particular, and turned us loose. By the time the dust had settled, we’d bought him a D’Angelico and one or two other instruments. Though we fell out of touch just after that, it eventually became clear to me that Ferolito had gone on to acquire the revered but inactive brand. Since then, he’s recruited a group of master builders to resume production, under his son’s watchful eye, and a review I spotted last fall in Acoustic Guitar magazine gave his revival effort high marks. Just as at AriZona, he had figured out a way to offer elegance and value in a single package. “Some may be skeptical of a guitar that sounds, plays, and looks this good for a street price of just over $1,000,” a reviewer wrote of one key model. But the guitar delivers, was his conclusion. That certainly made me nostalgic for the old days when Don and John were allies, not adversaries, gleefully upending the beverage business.