High pressure processing didn’t need to dominate the discussion to make a statement during day one of BevNET Live in New York City. The emerging form of cold pasteurization did come up repeatedly during the day’s presentations though, permeating Stacey Galvez and Daily Greens founder Shauna Martin’s exploration of WhiteWaves’ investment in the new company. It was also addressed throughout Cyrus Schwartz and Chris Psuik’s dialogue on erstwhile distributor Dora’s Naturals’ foray into the technology. But the processing method really made its presence in the beverage industry felt during the afternoon’s New Beverage Showdown, in which four of the sixteen brands featured utilize it. Perhaps most telling about the interest in the method among industry gatekeepers, like those who were judging: all four advanced to the final round of six.

Cold-pressed cacao beverage Rau took the decision out of the judges’ hands by earning the majority of the audience vote, but even without that honor, Rau’s chances were looking pretty good.

“I think this product is executed beautifully,” said Bill Weiland, founder of Presence Marketing Group, when offering his assessment of the San Diego-based brand.  “I think with good marketing, the benefits of the polyphenolic compounds in this product are going to help this product become more mainstream fairly soon. I think it’s a winner.”

Joining Rau in the second day’s final round were Subtle Tea, Meta Matcha, Caribe, H2Melon, and Sweet‘tauk, the latter three of which also use high pressure processing.

But of course the day wasn’t all about pasteurization processes. Matt McLean, founder and CEO of Uncle Matt’s organic juice kicked off the festivities with a look at the opportunities as well as the obstacles of being a supply-based brand (we’re looking at you regarding the latter, citrus greening disease).

Following the discussion of the investment process in Daily Greens, there was a note of discord on the whole topic of HPP: investment banker Nicole Fry warned of having too much faith in the process alone and the market getting overcrowded. 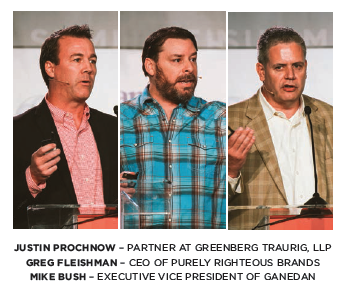 “There will be a shakeout,” she said. “You’re going to see a lot of small
brands struggle.”

Fry, an investment banker with First Beverage Group, did couch her discussion in the idea that there are many new brands coming of age, and that entrepreneurs should remain focused on promoting brand functionality.

That led into a three-pronged attack from Greg Fleishman (CEO of Purely Righteous Brands), Justin Prochnow (Partner at Greenberg Traurig, LLP) and Mike Bush (Executive Vice President of Ganedan) who tackled the delicate, multi-faceted balancing act brands must perform when going about making and marketing functional claims for their beverages.

“You really have to make sure you know what you’re saying,” Prochnow warned the audience of entrepreneurs of using terms like “Raw” “Natural” and “Rich in ____” when describing their products. “It’s not even the FDA as much as it’s plaintiff lawyers who are out there looking for the misuse of these words.” 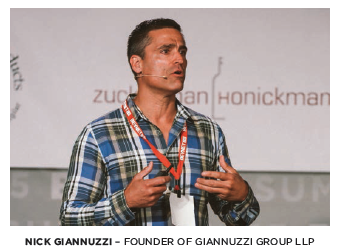 Nick Giannuzzi, a seasoned deal lawyer who works with growing food and beverage brands, walked the audience through some of the levers of control that can keep founders independent. The worst outcome for some, he said, has been founders who lose control of their boards and wind up in unfavorable situations even as their companies sell.

Later, in a presentation on the perks of premium pricing, Q Drinks CEO Jordan Silbert shared the story of his brand of high-end cocktail mixers and how the company’s “running lean for survival” model has allowed for significant growth without significant spending. On the other side of that approach, Isopure CEO Chris Hickey discussed the value of putting ad dollars towards brand building within the sports nutrition category, as well as ways that brands can think about whether to focus on just one channel or pursue a wider set of retail venues.

The afternoon came to a close with a presentation from Tripp Keber, CEO and co-founder of Colorado-based Dixie Brands, makers of THC-infused sodas Dixie Elixirs. A leader in a young but already extremely lucrative category, Keber’s remarks offered a sobering reality for anyone doubting the legitimacy and opportunity in the commercialization of recreational cannabis, which brought in $700 million in sales in 2014 in Colorado alone. Keber’s presentation also made a play at people’s morality.

“If you’re willing, and you have the interest, become a brand advocate for the plant,” Keber asked of the audience. “It’s immaterial if it’s Dixie or a competitor, because marijuana exists on every street corner in the United States and around the planet, and it’s going to continue. But why invest in a product that fuels narco terrorists when you could invest in a product that will build schools?”

The munchies had started to set in pretty hard by this point, so with that, attendees headed downstairs for some h’ordeuvres and happy hour cocktails. BevNET Live day one was in the books.

There was no hangover on Day Two, however, and things went right back to serious business.

Retail data experts Larry Levin of IRI and Kathryn Peters of SPINS set the action-oriented tone for the day in an introductory presentation on how brands accelerate and the process of graduating from the natural channel to some of the bigger retail channels, offering a precursor for Jack Sinclair’s discussion later in the afternoon on achieving Walmart-level scale.

Voss Water CEO and beverage industry icon Jack Belsito, who used to run Snapple, followed the IRI/SPINS presentation in a sit-down with BevNET Editor-in-Chief Jeff Klineman, discussing the current competitive climate of the bottled water market and his experiences as the head of both a large company and a small one. 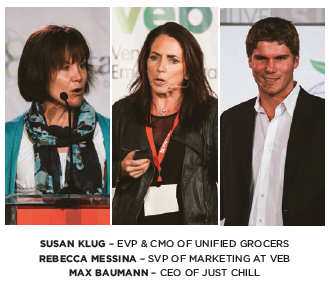 “The most important thing you can show,” she said, “is that you’ll grow a category, not just your brand.”

The New Beverage Showdown returned with its final round of six after a brief intermission, as Rau, Caribe, H2Melon, Sweet’tauk, Subtle Tea, and Meta Matcha extended their two minute pitches from Tuesday’s first round to longer five minute presentations, padding out their origin stories with their respective business models. The competition was palpably tighter this round, and the judges didn’t mince words in offering criticism on packaging, positioning, and the inherent challenges facing these brands’ products.

Speaking of challenges, Chris Campbell, Daniel Sullivan, and Jesse Altman (CEOs of Chameleon Cold Brew, Temple Turmeric, and Whynatte, respectively) took the stage for a panel exploring how all three had made significant and necessary changes to their brand and product within the last year.

“You have to constantly pivot, update, and recreate and keep things fresh,” said Sullivan. “Especially in beverages it’s an incredibly crowded space so you have to be very much aware of what’s on trend, what’s the market environment and what people are resonating with.”

Presenting findings from Coca-Cola’s Venturing and Emerging Brands’ “Founders Forum” Rebecca Messina, Senior Vice President of Marketing at VEB, spoke on the company’s goal of finding brands that hit the “sweet spot of commercial value and emotional value.” Max Baumann, CEO of Just Chill relaxation beverage, who participated in that forum, touched on that latter part as well, taking the audience behind the curtains of Just Chill’s recent low-cost-but-impactful social media efforts.

After lunch, Laura McCord of KeHE distributors followed up on Susan Klug’s earlier exploration on what’s hot in grocery and gave brands a set of guidelines to follow through to achieve distribution within these unique channels. “Tailor your retail strategy,” McCord instructed the audience of entrepreneurs, warning of the fate that awaits brand owners who approach retailers without knowing what they stores are currently seeking.

Louis Barone, Senior Vice President and Division Head of IDB Bank and Greg Wank, Executive Partner at Anchin, Block, & Anchin LLP followed McCord with a look at inside lending in the industry. John Gianuzzi of Sherbrooke Capital furthered the financial discussion by honing in on an existential question: “Are we in a bubble?”

The conference began to wind down with a three-armed panel consisting of Kevita co-founder CEO Bill Moses, Bell Advisory Group Founder David Bell and a return from Baumann to discuss maintaining competitive advantage by defining categories. Discussed within were Moses’ recent decision to take a leadership position in the ongoing issues surrounding alcohol content in the kombucha industry, as well as Baumann’s flag planting of his own in the relaxation beverage space, one that has suffered due to regulatory concerns about melatonin use.

Finally, riding the momentum of their strong showing in Tuesday’s semifinals, San Diego-based high pressure processed cacao beverage Rau was crowned winner of the New Beverage Showdown to bring BevNET Live to an end. Like Tio Gazpacho in December, Rau saw a clean sweep victory, winning both the audience’s vote as well as the judges’.