As the sun set on the 2017 Craft Brewers Conference, held last month in Washington D.C., a few key storylines have emerged from the nation’s largest gathering of small and independent brewers. 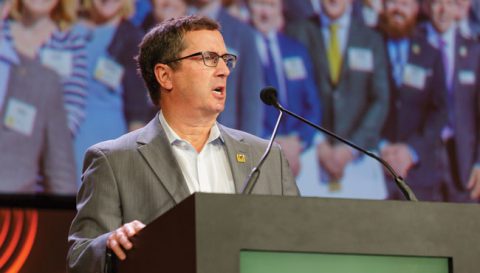 In his opening remarks, Pease accused the “old order” – companies like Anheuser-Busch InBev and MillerCoors, who in recent years have spent hundreds of millions of dollars acquiring small craft breweries — of attempting to “put the genie back in the bottle” and “use big money to squeeze out craft brewers from the marketplace and limit beer drinker choice.”

In describing those purchases as a “deliberate effort to eliminate the differentiation between small and independent craft brewers and those owned by larger conglomerates,” Pease resuscitated a four-year-old debate that first began in late 2012 when he, alongside BA chairman Charlie Papazian and Schlafly Beer co-founder Dan Kopman, penned an op-ed extolling the virtues of independently owned craft breweries for the Saint Louis Post-Dispatch.

At the time, Pease argued that “large international” brewers were “capitalizing on the unprecedented growth” of craft and producing “faux-craft beer.”

That message has since been refocused around four pillars: independence, authenticity, collaborative spirit and community-mindedness.

“These values are in your DNA and ours (the BA) too,” Pease told those in the crowd. “And consumers — America’s beer drinkers — know that.”

In an interview with Brewbound, BevNET’s daily beer business publication, Pease said the BA would be “hanging its hat” on the value of independence.

“We think it does matter to the beer drinker – who makes the beer – and that is where you will see renewed energy and focus from the BA,” he said.

Allagash founder Rob Tod, who also serves as the chair of the BA board of directors, echoed Pease in his own day one address and characterized the state of the beer business as in the midst of a “tectonic shift.”

“We should be gravely concerned when we hear themes like ‘independence does not matter to the beer drinker,’” he said.

Tod implored brewers to continue having conversations with beer drinkers, and members of the media, about the differences between independently-owned craft breweries and those owned by larger conglomerates.

“For the sake of beer, we need to tell our story and keep the steering wheel for beer in the hands of the small and independent brewers,” he said.

That “tectonic shift” Tod referred to also came up when BA director Paul Gatza and chief economist Bart Watson delivered their annual “State of the Industry” presentation that highlighted slower growth trends and looked at the evolving makeup of businesses within the craft segment.

The days of double-digit growth in the craft beer category might be a thing of the past, the pair said, but that doesn’t mean many small and independent brewers won’t continue to thrive. 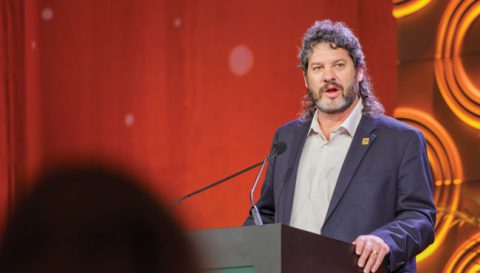 “It’s slowing down, that’s true,” BA director Paul Gatza said. “But there’s still a lot of growth out there, and somebody’s going to get that growth.”

Watson urged those who track the industry to keep in mind that the double-digit growth of past years was unsustainable as the industry matured.

Nevertheless, BA-defined craft brewers added 1.4 million barrels to the beer category last year, which Watson called “the fifth best year that craft has ever had.”

“I think we sometimes lose that sentiment,” he said.

Watson also noted that growth trends typically vary by state; those with an above average craft share grew just 1.9 percent last year while those with a below average share grew 7.7 percent. He also recommended that brewery owners in the crowd think about the future of their businesses.

During the presentation, Gatza also addressed a lack of diversity within the craft beer industry. He urged the organization’s’ members to be inclusive in order to reach women and minorities, not only as customers but also as employees.

“I think we want to stay away from names and labels that can be offensive,” Gatza said.

Then, at a press briefing following the presentation, the BA announced steps to prevent breweries that use offensive or sexist names and labels from marketing their businesses with the industry trade organization’s intellectual property in regards to World Beer Cup and Great American Beer Fest awards and medals.

The organization’s leaders said they will still allow those brewers using questionable names to participate in its awards competitions and join its membership ranks, but noted that winners with offensive names will not be celebrated during awards ceremonies.

“If a brewery with an offensive name or label were to win an award, we would not read that name from the stage,” said Brewers Association president and CEO Bob Pease.

The beer industry is littered with past and present examples of innuendo for names and questionable labels such as Pig’s Mind Brewing PD California Style Ale (the PD is an acronym for Panty Dropper and the label features a drawing of a woman with her underwear around her ankles), Flying Dog Pearl Necklace Chesapeake Stout, SweetWater Happy Ending Imperial Stout, Stark Brewing’s Mt. U Golden Cream Ale and Village Idiot Brewing Co. Thong Remover Belgian Tripel. Some have been discontinued. Others live on.

“We will not allow them to market their award using our intellectual property,” Pease said, adding that the BA would not allow its name to be associated with labels and marketing efforts that it feels would damage its image.

The new policy is written into the BA’s advertising and marketing code, which was first enacted in 2008, and leaders admitted that they’re wading into a “sticky,” “subjective” and “sensitive” subject.

“We want our members to be responsible corporate citizens,” Pease said. “We want to err on the side of tolerance. It’s not going to be black and white. There’s a subjective element to that, and the Association, we’re going to find ways to be inclusive. But at the same time, we do think this step is the right thing to do and shows the leadership that is needed. But it’s gonna be sticky. It’s going to be hard.”

Also during the press briefing, the BA announced the formation of a Diversity Committee, which aims to bring “a more diverse group of brewers and beer lovers into the craft brewing community.”