California-based Revive Kombucha unveiled a new look for its 12 oz. glass bottles featuring a simplified and streamlined visual identity that founder Sean Lovett said would bring greater attention to the liquid itself.

“We wanted to let the ingredients be the star of the show,” Lovett told BevNET in June. “The one clear idea we had is that less is more. How can we describe more to the consumer with a less busy package?” 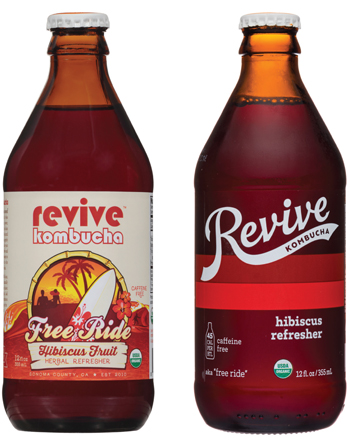 The new design is a clear pivot from Revive’s previous labels, whose vibrant colors and playful iconography Lovett said helped give the brand a clear personality and visual identity that stood out on the shelf as it made the leap from a regional to national presence.

On the new bottles, the flavor names have been pushed to the lower body, while text directly below the stripes emphasizes the actual ingredients and flavors in the liquid itself. Free Ride is now Hibiscus Refresher, Spring Fling has become Cucumber Lemon Mint, Up Beat is now Mocha Java Coffee, and so on.
Along with the new look, Revive is also debuting a new flavor: Turmeric Ginger Citrus, a.k.a. “Power Duo.”

Plant-based beverage maker Califia Farms announced a $50 million round of financing in July, which was led by Luxembourg-based investment bank Ambrosia Investments and included a slate of high-profile celebrities and influencers. 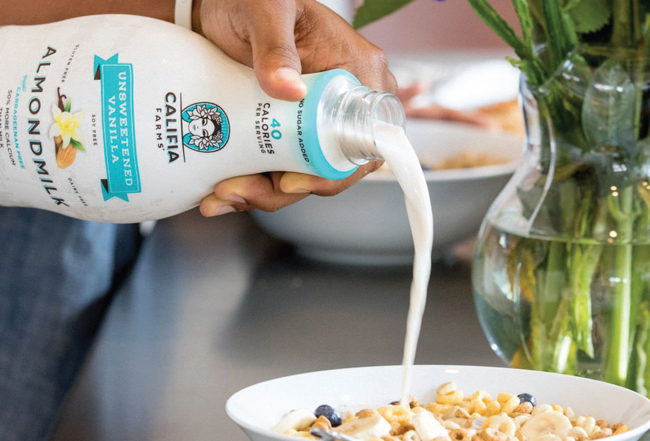 The new investment follows a $50 million venture round led by Stripes Group in October 2015 and a $15 million investment by CapX partners last September aimed at expanding bottling and pasteurization capacity at Califia’s Bakersfield, Calif.-based production facility.

Speaking with BevNET during the 2018 Summer Fancy Food Show in New York City, Califia co-founder and CEO Greg Steltenpohl said the deal will help the company create long-term value and make a deeper commitment to research and development.

Steltenpohl said that ‘Queen Califia’, the mascot from the brand’s logo, would also be integrated more prominently into Califia’s consumer-facing messaging in the near-term. Leto’s band, 30 Seconds to Mars, will feature a 90 second video introducing Queen Califia as “the spirit of California” prior to the start of each show during their Monolith Tour this summer.

At the same time it broke the news about the new funding, Califia also announced the appointment of Sandeep Patel, a former managing director at Barclays and Goldman Sachs, to the role of Chief Financial Officer.

Vita Coco CEO Mike Kirban, who joined Runa as an investor and member of its advisory board in 2014, told BevNET at the time that he saw the brand, which produces an eight-SKU line of natural energy drinks made with organic guayusa, as an opportunity to disrupt the existing energy drink set.

“I think Runa is perfectly positioned as an organic, better-for-you energy drink that can really challenge in this space,” he said, noting rising consumer interest in cold brew coffee and other drinks with natural caffeine.

Kirban said both Runa and Vita Coco would exist as independent companies under the AMI umbrella. Under the terms of the deal, Runa will be 100 percent owned and operated by AMI.

Runa, founded in 2009 by Tyler Gage and Dan MacCombie, has established the brand around a social mission of empowering its Ecuadorian partner farmers through sustainable agriculture and ethical business practices. The company attracted a slew of celebrity investors, including actors Leonardo DiCaprio and Channing Tatum.

Ahead of the close of the transaction in July, Keurig Dr Pepper, the new entity that comprises the merger of Dr Pepper Snapple Group (DPS) and Keurig Green Mountain, unveiled its new leadership team in June.

Some of the moves had been previously announced. Keurig CFO Ozan Dokmecioglu continued in his role at KDP, while DPS CEO Larry Young retired from the company and joined KDP’s board of directors.

Lain Hancock was appointed Chief Strategy and Emerging Brands Officer, having guided Bai Brands as CEO for just over a year following the departure of founder Ben Weiss last June. DPS acquired the New Jersey-based company for $1.7 billion in 2016.

Elsewhere, Rodger Collins, president of packaged beverages at DPS, was appointed president of direct store delivery (DSD) at KDP, where he is overseeing for all company-owned DSD operations.