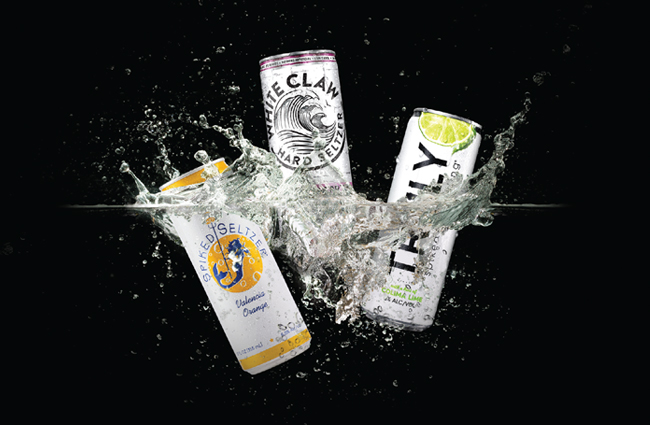 The flavored malt beverage segment has had its share of ebbs and flows in the two decades that it’s been a full-fledged category — and its ability to regularly reinvent itself has kept things a bit more flow than ebb in recent years. But what’s most remarkable is how eager consumers seem to be to move on to the category’s next incarnation. However, it seems, at least for now, that they may be sticking with its current growth driver, hard seltzer.

Alcoholic sparkling water has grabbed most of the momentum of its predecessor, the sweet, CSD-like hard soda. The big story about three years ago, hard soda is looking more and more like a flash in the pan, if recent figures from Chicago-based market research company IRI are any indication. The Not Your Father’s brand family, created by Wauconda, Ill.-based Small Town Brewery and distributed through Pabst’s network, saw its volume drop by more than 30 percent in most major off-premise channels in the 52-week period that ended in late March. Meanwhile, MillerCoors’s Henry’s Hard line saw a similar drop of 33.6 percent, according to IRI. Anheuser-Busch InBev’s Best Damn case volume suffered the steepest decline, dropping more than 60 percent versus the same period the prior year.

The numbers are much better for some of the major hard seltzer brands, with the caveat that there were barely any players in the segment before about two years ago to draw any significant year-on-year, apples-to-apples comparisons. Boston Beer’s Truly Spiked & Sparkling, which launched in the spring of 2016 saw its volume climb about 200 percent over its (roughly) first full year on the market. Boston sold more than 1.5 million cases of Truly, accounting for more than $52 million in retail revenue, between late March of 2017 and late March of 2018 at the major off-premise channels that IRI tracks. The Spiked Seltzer brand, which launched in 2013, seems to have gotten quite a boost from its fall 2016 acquisition by AB InBev. Spiked Seltzer, volume jumped more than 400 percent to just over 760,000 cases and retail revenue just over $25 million. But the segment leader right now is White Claw, launched in June 2016. IRI reports that White Claw sold nearly 2 million cases in that time period, representing about $67 million in revenue.

Auburn, Mass.-based Atlas Distributing carries most of the major hard seltzer brands and has seen rapid growth among all of them. “Year-to-date, we’re up 75 percent across the board,” reports Atlas vice president Jamie Salois. “Last year we did about 110,000 [case equivalents] of hard seltzers and this year we could be close to 200,000. “It’s a great thing that we have the whole portfolio [of hard seltzers], so we can participate in building that category in our accounts. We’re just seeing tremendous growth.”

A few years back, you could’ve said the same thing about the likes of Not Your Father’s Root Beer, but Salois is quick to point out that there isn’t necessarily a sense of déjà vu.

“With the hard sodas, it was a new innovation and it was a really big incremental purchase for a lot of consumers,” Salois explains. “When Not Your Father’s came out, it grew and grew and was steady into the next year and then we were kind of hitting the same number of cases month to month. And that has slowed.”

The difference between hard sodas and hard seltzers, he says, is that the latter are more in line with broader consumer trends—particularly involving health and wellness. Think about the non-alcohol side of the business. Beverages perceived as “better for you”—including regular, alcohol-free seltzers like LaCroix—have been growing, while CSDs have been losing volume for about a decade and a half. The same dynamic appears to be playing out in the adult beverage sector.

“It’s a more health-conscious consumer looking for an alternative beverage that can play against wine, against beer and against spirits,” Salois notes. “And I think there’s a ton of run room left.”

And there’s room for new players to get into the space. Even though the top-selling brands are all tied to larger companies, smaller, boutique brands have been finding a place in the market. Among those is Press Alcohol Seltzer, which founder Amy Walberg calls “one of the only craft seltzers in the category.” (The case could be made that Nauti, from Massachusetts craft brewer Wachusett, fits in that space as well).

“It’s really an evolution of hard soda, which are very sweet and so forth,” says Walberg. “[Hard soda] was a novelty. The average consumer was longing for something that was an alternative to beer and wine. I like beer and I like wine, but not always—when I want something lower ABV, I don’t want a big, bold red.”

A 12-oz. can of 4 percent ABV Press contains 100 calories. The lower-ABV and lower-calorie aspects are the main reasons that Salois and Walberg feel hard seltzers aren’t likely to be competing for the same consumption occasions as the growing number of RTD, spirit-based craft cocktails, whose ABVs and calorie content tend to be a bit higher.

“When I originally started the company, I was drinking a lot of La Croix, but I wanted a little something in my LaCroix at the end of the day—that and to have the best flavor profile,” Walberg says.

Salois says variety packs have been the big sellers for Atlas, as it drives trial across a brand’s flavor spectrum.

One flavor you’re likely to see a bit more of this year is rosé, as hard seltzer producers are capitalizing on the surge in popularity of rosé in the wine space, especially during the warmer months. Nauti already has unveiled its rosé offering and others are likely to follow. “We should see some pretty big volume as the weather starts to turn,” Salois says, “and people get more active and get outside.”