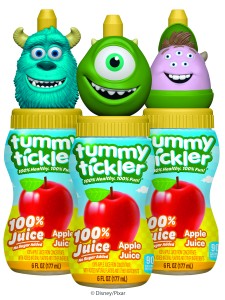 “The Monsters University movie is going to be the biggest family movie released this summer, and In Zone is thrilled to offer these cool characters for our bottle tops,” said In Zone VP of Sales Jody Cook. “Parents want to give their children the best juice option, and we want to help in their efforts to give their children the healthiest juice – Mike, Sully and Squishy make it fun for kids to drink.”

TummyTicklers are for children ages 3 to 6 and provide a 6-ounce serving of 100% apple juice with no added sugar or high fructose corn syrup, and no added colors, flavors or preservatives. A TummyTicklers serving is equal to ¾ cup fruit. Character tops for all products are spill-proof and mess-free and the BPA-free bottles have an ergonomic grip. Tops are also washable and reusable.

The Disney Pixar Monsters character tops will also be available for regular packout in Fall 2013 orders for both TummyTicklers and TummyTicklers Tots beverages.

About In Zone Brands

In Zone Brands is based in Atlanta and creates healthy children’s beverages that are also uniquely fun for children to drink because the no-spill toy tops feature their favorite cartoon characters or sports. In Zone Brands BellyWashers®, TummyTickler® and TummyTickler®Tots are products that parents feel good about giving their children because they are healthy 100% juice. Children enjoy the beverages because the juice tastes good and the toy tops are fun to play with and collect.