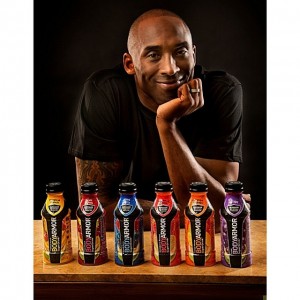 The NBA’s Black Mamba may be winding down his basketball career, but when it comes to the beverage business, Kobe Bryant is just getting started.

In an interview with ESPN’s Darren Rovell, Bryant revealed that he has made a multi-million dollar investment in BodyArmor, the functional sports drink brand launched by FUZE founder Lance Collins and helmed by Mike Repole, the co-founder of Vitaminwater. The investment is Bryant’s first as part of his new company, Kobe Inc., and makes him the third largest shareholder in BodyArmor behind Repole and Collins, according to a release from the company.

Earlier today, Forbes reported that Bryant’s investment in BodyArmor is estimated to be in the $4-6 million range and that his stake gives him over 10 percent of the company. Bryant will have a seat on BodyArmor’s board of directors, according to Forbes, and will be involved in “all aspects of the business.”

Launched in 2011, BodyArmor, which is formulated with coconut water and added vitamins, recently shifted its branding from that of a multi-function “superdrink,” to a beverage now marketed as “premium sports drink.” The update is certainly more in line with its stable of athlete endorsers, which include the NFL’s Rob Gronkowski and Andrew Luck, MLB’s Mike Trout and the NBA’s James Harden.

Stating that “if you want to be a true entrepreneur you have to put skin in the game,” Bryant told Rovell that “at this stage in my life, I don’t have the interest in taking on any more endorsements.” He told Forbes that he sees BodyArmor as a brand that could be “very disruptive” in the sports drink category, and scoffed at top brands Gatorade and Powerade as “bland with no innovation.”

“From a standpoint of innovation, if you look at the category, the category itself has been a dormant one for years,” Bryant said in the interview with Rovell. “They have become accustom to drinking one product because that’s been the only one available to them. There hasn’t been a product that has come to them and said, ‘There’s another way to upgrade your sports drink.’ “

Over the past year, Bryant has been struggling with injuries to his Achilles tendon and left knee, playing only six games for the L.A. Lakers this season. However, he is expected to fulfill a two-year contract extension, one that he signed in November, and is likely to become the centerpiece of BodyArmor’s roster of athlete-endorsers, playing a major role in promoting the brand.

“That Kobe chose us helps validate what we bring to the table as a brand,” Repole told Rovell. “We’re honored to have one of the most elite players of all time on our team.”

BodyArmor had an estimated $10 million in sales in 2013, and has gradually expanded distribution via Dr Pepper Snapple Group in New Jersey and Northern California. The brand is also represented by a few independent DSD powerhouses — Big Geyser in New York City, Haralambos in Southern California and The Honickman Group in the Mid-Atlantic — however, BodyArmor has faced some difficulty is gaining brand awareness, particularity amid an ultra-competitive landscape for sports beverages. Priced at $1.99, BodyArmor is “still a premium product compared to what’s out there,” Collins said in an August interview with BevNET, noting that “the pricing game has changed” for entrepreneurial beverage brands.

Nevertheless, Repole, who last year earned a nearly $200 million windfall from the sale of snack brand Pirate’s Booty, has stated that he, Collins and other BodyArmor investors are willing to spend $50 million over the next few years to support the development of the brand.

“If I was coming out with a beverage right now, I wouldn’t want to compete with BodyArmor,” Repole told BevNET.

Bryant, who is well-known as a fierce competitor, is undoubtedly thrilled with the mindset of his equally relentless business partner.