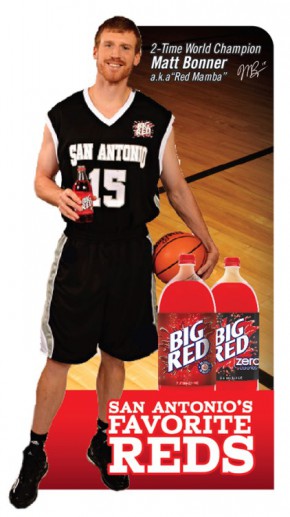 “As a Texas-based company, we’re excited to welcome local legend Matt Bonner to the Big Red team,” says Big Red’s SVP of Marketing Thomas Oh. “Big Red is San Antonio’s #1 flavored soft drink and Matt is the only redhead in the NBA. So it makes perfect sense for San Antonio’s two favorite reds to partner together to get fans pumped for another championship season.”

“I’m really excited to team up with such a unique, iconic Texas brand in Big Red soda,” says San Antonio Spur Matt Bonner. “This partnership will create some cool opportunities to engage with fans of this delicious soft drink as we try for back-to-back championships with the Spurs.”

When he’s not playing basketball, Bonner is quirky, trustworthy and relatable. With his brother Luke, he co-founded the Rock On Foundation in 2013, which serves to increase community artistic and athletic opportunities. He also appeals to his fans by making short videos titled “Wrapping with the Red Mamba,” in which he eats sandwiches with popular rappers. As an all-around fun, creative basketball player, Bonner makes a “Deliciously Different” addition to the Big Red Soda team.