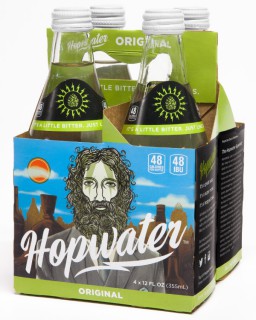 Cincinnati, Ohio – The Cincinnati-based company 48th Parallel Inc. has announced plans to distribute their line of hop-flavored sodas called Hopwater throughout Ohio beginning Monday, May 4. 48th Parallel’s Hopwater is the named leader in this new category of hopped beverages, also called Hopwater, and is a carbonated, low-calorie beverage made with 100% natural ingredients, including natural cane sugar and Zeus hops.

48th Parallel has partnered with Cincinnati-based Cavalier Distributing as their distributor for Hopwater. “Who better to partner with on a hop-flavored soda than the best craft beer distributor in Ohio? Cavalier is the perfect fit for Hopwater. They know hops, they get who we are, and they’re excited about the brand. We couldn’t be happier to be working with Cavalier, and we anticipate great things to come from our partnership,” says CEO Brandon Dawson.

Born in Cincinnati, Hopwater is more than just a soda, beer, or mixer. It’s a new category of hopped beverages for people who love hops, but do not want the alcohol, people who love soda, but not the excessive sugar and calories, and for people who love tonic water, but don’t want the Quinine.  In addition, it is a fantastic cocktail mixer and has just 48 calories and 48 IBUs.

“We are excited to partner with 48th Parallel and introduce this refreshing new liquid category to our customers. Hopwater is one-of-a-kind in the Cavalier portfolio, and we’re thrilled to launch it in our hometown,” says George Fisher, Founder/President of Cavalier Distributing.  Cavalier will distribute all current Hopwater flavors including Original, Ginger, Lime, and Grapefruit to both retail and on premise locations.

About Hopwater/48th Parallel
If there’s a city in the U.S. that knows hops, it’s Cincinnati, and the six founders ofHopwater have worked to stay true to the Queen City’s hoppy roots. Invented over lunch at an Indian restaurant in Springdale, formulated at a lab in Blue Ash, and perfected at offices in Oakley, Hopwater is Cincinnati through and through. Hopwater hit the market in early 2015 with four flagship flavors filled with authentic floral hop aroma. Each of the Hopwater flavors has a distinct personality, but all stand on their own two feet, and every Hopwater flavor has just 48 calories per bottle, clocks in at 48 IBUs on the bitterness scale, and is caffeine and alcohol free.

Established in 1992 by Founder/President George Fisher, Cavalier Distributing is one of the only distributors in the country with a portfolio that is exclusively American craft and imports. Cavalier operates 250,000 square feet of warehouse space dedicated to bringing great beer, spirits, and other craft beverages to the increasingly discerning, appreciative, and educated consumers in Ohio, Indiana, and Florida. Cavalier employs more than 250 employees throughout the three states and is headquartered in Blue Ash.