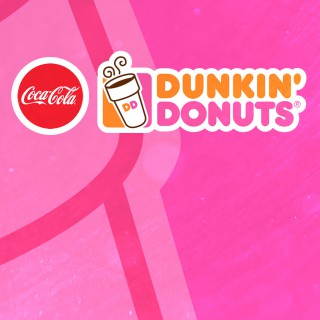 Add another arrow to the Coca-Cola Co’s rapidly growing quiver of coffee stakes.

The company today announced that it was planning to partner with restaurant chain Dunkin’ Donuts to produce a line of ready-to-drink (RTD) coffee products for release early next year. That comes just four weeks to the day after  Coke announced that it would be launching cold brew coffees under its Gold Peak Tea brand as well.

Of course, why not add another layer to Coke’s coffee strategy on Sept. 29 — National Coffee Day?

The joint venture will be Dunkin’ Donuts’ first venture into RTD coffee. The chain, publicly traded under Dunkin’ Brands, has long been a source of quick-served coffee and iced coffees on the go, and recently entered the cold brew coffee category itself.

In a press release, Dunkin’ Brands CEO Nigel Travis said that a partnership with Coke on the RTD products will bring “world-class consumer access” to “the refrigerator cases of grocery, convenience stores and mass merchandisers, as well as inside Dunkin’ Donuts restaurants, across the United States.”

Financial terms were not released in the announcement, which suggested that the coffee drinks would use milk, sugar, and come in a variety of flavors.

The restaurant brand is teaming up with the world’s largest beverage company at a time when the $2.3 billion RTD coffee category is tightly controlled by the PepsiCo/Starbucks North American Coffee Partnership, which has been selling bottled products like the Starbucks Frappuccino since 1996. That partnership comprised 97 percent of the RTD Cappuccino/Iced Coffee category as of July, according to data supplied to BevNET by IRI, a provider of enterprise market information solutions. It’s one of the fastest-growing areas of the beverage industry.

Coke has tried to enter the category via a line of products developed with European coffee giant Illy, but the brand has yet to make a large national imprint. In the past, it also has partnered with companies like Caribou Coffee Co. and Godiva Chocolate to try to develop products that could break its rivals’ hold on the coffee space.

Dunkin Donuts also announced it would share profits from products sold outside of coffee shops with its franchisees.