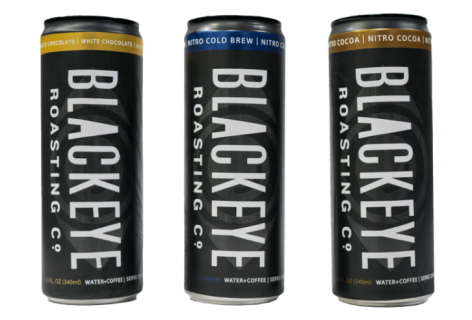 SAINT PAUL, Minn. — After two years of increasing demand for Blackeye Roasting Co.’s nitro cold brew, the creative minds behind the brand are excited to announce the launch of new and improved flavors this fall. Their signature drink, Nitro Cold Brew, has been reformulated with a new taste profile and is now preservative free. New to the shelf are White Chocolate and Nitro Cocoa flavors. Both new flavors are made with a proprietary blend of cold brewed coffee and nondairy based creamer, making them shelf-stable and extra creamy.

Customers scanning the shelves will take note of another change. Blackeye’s packaging has been redesigned with a sleek, new look. The cans are now taller and slimmer and have transitioned their branding to feature a matte black background.

“Since launching, we’ve watched the cold brew market explode,” said founding owner Matt McGinn. “We anticipate that flavored cold brews will increase our customer base. Many people prefer sweet coffee, so we created something that tastes like you’re drinking an iced mocha or white mocha from your favorite independent coffee shop. For coffee lovers that prefer something a bit sweeter, these new flavors hit the spot.”

Established as a leader in the cold brew market across the Midwest, Blackeye has set its sights beyond the region as they continue to grow. The launch of these new flavors comes in tandem with the opening of a new 28,900 square foot facility, which allows Blackeye to take the brewing and canning process in house and expand production up to six million cans per year. This increased production has led to distribution deals that now make all Blackeye flavors available locally Holiday Station Stores, and Hyvee. Expect cans to be sold Statewide at independent convenience and grocery stores throughout the Midwest.