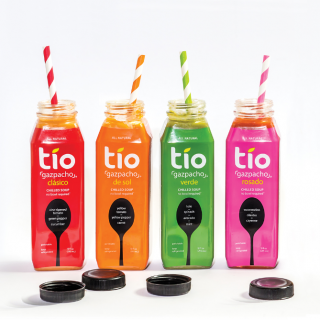 NEW YORK, N.Y. — Tio Gazpacho, the industry leader in the emerging category of drinkable soups, today has announced that it has achieved two new certifications for its line of products.

“The Whole30 meal template is already heavy on the veggies, but I’m always looking for ways to squeeze even more nutrition into my richly scheduled days. I love Tio Gazpacho for their whole-food ingredients, no added sugar, and easy portability. I’ll grab a bottle after the gym, pack a few on a road trip, or drink as a side of supercharged hydration with my midday meal,” said Whole30 co-founder Melissa Hartwig.

In addition, Tio’s Clasico, de Sol and Rosado flavors have achieved non-GMO Project Verification, North America’s most trusted third-party verification for non-GMO food and products. Tio Gazpacho is working to finalize certification for its other two varieties in the coming months.

“It’s no secret that consumers today want to know what is in their food. Whole30 and non-GMO Project verification are two fantastic ways – in addition to our super clean ingredient list – to signal to customers they can trust Tio Gazpacho to be chock full of whole foods, and free from genetically modified, highly processed ingredients. Since we launched almost four years ago we have always used clean, non-GMO ingredients and we are truly delighted to announce our relationship with these two internationally recognized partners” said Austin Allan, founder of Tio Gazpacho.

“I personally follow Whole30 twice a year and naturally drink plenty of Tio Gazpacho while I am on the plan. I am excited that other Whole30 fans will now know that they can add to Tio to their diet while following the plan.”

Launched in 2014 and made with fresh, simple ingredients, the Tio Gazpacho line features five different recipes that range from classic to inventive. Shortly after its launch, Tio earned the attention of Michelin-starred chef and restaurateur José Andrés, who today serves as a brand advocate and partner of the company. Tio is available in six major markets across the US through channels including fast casual restaurant chains, natural and specialty retailers like Whole Foods Markets and airport locations.

Tio will be exhibiting at Natural Products Expo West March 8-10. Visit us at booth N1608 in the North Hall. For more information, visit www.tiogazpacho.com.

Tio Gazpacho was founded by Austin Allan after living abroad in Spain. Enamored with the country’s way of life and love of the chilled soup, Austin knew that gazpacho could be a great way to bring a little bit of Spain to the US while creating products that are as delicious as they are healthy. Austin spent two years in Miami testing recipes and sampling products before moving the company to New York. He became hooked on the idea of revolutionizing the soup industry and ensuring Tio Gazpacho’s place as the front-runner in the newly created “drinkable soup” category in the U.S. In September 2014, Tio Gazpacho officially debuted at Natural Products Expo East. In January 2015, the first three flavors launched in stores and in 2016 and early 2017 it added its newest flavors: Rosado and Maiz. In 2016, the brand closed a $1.25 million Series A funding round with 301 Inc., General Mills’ business development and venture capital arm. It is now available throughout the Northeast and on the West Coast. Tio Gazpacho is committed to giving back and donates a portion of sales from every bottle sold to Development in Gardening (DIG), a non-profit whose mission is to ensure that people all over the world have access to quality, nutritious food. For more information, visit www.tiogazpacho.com.