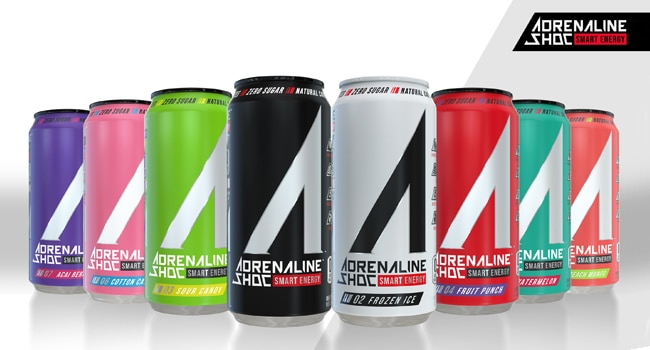 Editor’s Note: This story has been updated from its original version.

On Tuesday, Outlaw Beverage Inc. was denied a preliminary injunction in the Delaware Court of Chancery that would have blocked co-founder Lance Collins from launching his new product, energy drink Adrenaline Shoc (A Shoc), in stores this month.

Outlaw alleged that Collins stole the brand, design and formula for A Shoc, a “performance energy” line which was announced in April.

Collins, who has created beverage brands such as FUZE, Core and NOS, remains the second largest shareholder in Outlaw Beverage. The ruling clears the way for A Shoc to launch into retail this month.

In order to receive a preliminary junction in its favor, a plaintiff must establish “reasonable probability of success on the merits, that irreparable harm will result if an injunction is not granted, and that the balance of equities favors the issuance of the injunction.”

The crux of the case centers on an August 2018 meeting between Outlaw CEO Jesus Delgado-Jenkins, Collins and representatives of 7-Eleven during which the convenience store chain expressed an interest in contracting Outlaw to produce a private label product to compete with the fast-growing energy drink Bang. The motion for preliminary injunction hinged on the probability of Outlaw proving its claim that Collins created A Shoc “expressly and solely” in his role as an Outlaw director and as a result of the August meeting.

According to a telephone transcript, in which he explained his decision to deny the plaintiffs’ motion to attorneys from both parties, Chancellor Andre G. Bouchard said that email evidence showed that Delagado-Jenkins was aware in October 2018 that Collins had applied for various trademarks related to Adrenaline Shoc in the name of Chez Isabelle, LLC. That same month, Collins reportedly sent Delgado-Jenkins a text message which indicated there was “no way” in which he would be “putting A Shoc in Outlaw.”

In October, 7-Eleven informed Outlaw it was suspending its pursuit of a private label energy drink, and has not revived its interest at any time since.

With regards to the brand, Bouchard noted that Collins personally came up with the name, applied for the trademark and paid for all the work related to A Shoc. The fact that Delgado-Jenkins was “aware in real time” about the trademark filings made on behalf of Chez Isabelle and did not object to them “would undermine Outlaw being able to prove at trial that the Adrenaline Shoc brand was created or developed by Collins expressly and solely in his capacity as a director of Outlaw,” the chancellor said.

In addition, Bouchard said evidence showed that Collins himself, rather than Outlaw, paid independent consultants for design and presentation materials related to A Shoc, and was thus not acting expressly and solely as a director of Outlaw.

According to the transcript, Paula Grant, owner of design agency Flood Creative, prepared a presentation of new brand ideas for a September 2018 meeting with 7-Eleven which included an A Shoc can design created by independent designer John Malloy, who was hired by Collins. Grant said she prepared the presentation as a favor to Collins and that the matter was separate from billings for other work done by Flood Creative on the relaunch of Outlaw.

Finally, Bouchard knocked down Outlaw’s claim of ownership over the formula for A Shoc, citing testimony by Nancy Vorbach, who led the development of A Shoc’s formula for Wild Flavors, disputing the energy drink maker’s assertion that Collins’ product was “based off the formula for Outlaw.”

These incidents, according to the chancellor, established that Outlaw knew that Collins intended to develop A Shoc as a separate entity long before bringing the issue to court in May and therefore the defendants’ assertion that Outlaw waited an “unreasonable” amount of time — seven months — before filing the complaint against Collins last month was “meritorious.”

Bouchard also rejected Outlaw’s claim that the delay was due to Collins allegedly lying to Delgado-Jenkins for six months about his plans for A Shoc, noting that the company had “not provided any corroborative testimony or documentary evidence to support this assertion.” The chancellor noted that Delgado-Jenkins “tellingly” never suggested to distribution partner Keurig Dr Pepper (KDP) that Outlaw had “any interest or role in Adrenaline Shoc” in November 2018 when KDP expressed an interest in a joint venture to bring the product to market in his presence, nor did he mention the brand during Outlaw’s January board meeting or in a February letter to investors. Outlaw has not presented planning documents, sales forecasts, or any other internal papers after mid-October 2018 reflecting A Shoc was its product, according to the transcript.

Rather than seeking to defend Outlaw’s alleged ownership of A Shoc, the chancellor said Delgado-Jenkins sought to obtain an equity interest in the brand. He cited a private placement memo from December 2018 in which Delgado-Jenkins is listed as chief strategy officer at A Shoc and a December 2018 signed draft LLC agreement for A Shoc that stated he would receive equity in the company. In March 2019, Delgado-Jenkins reportedly gave Collins information on his LLC for the purpose of obtaining 50,000 shares in A Shoc.

“Indeed, it was only after Delgado-Jenkins appeared to realize in April 2019 that he would not be an investor in A Shoc that the claims in this case were asserted,” the chancellor said in the transcript.

By delaying its legal action until shortly prior to A Shoc’s launch, Outlaw was unreasonable and prejudicial to the defendants, Bouchard noted.

“Enjoining the introduction of Adrenaline Shoc is far more likely, in my view, to impose significant and tangible harm on A Shoc than declining to issue an injunction would impose on Outlaw,” he said, according to a transcript.

In response to the ruling, Collins wrote in an email: “A Shoc is full steam ahead. A Shoc Energy products will be in the market by next week! Get ready America for A Shoc to revolutionize the energy category.”

A Shoc is set to launch in roughly 30-40,000 stores this month, largely in the convenience channel. The brand’s regional priorities will include all of California, Texas, and Nevada as well as Denver and Chicago, with a broader expansion planned for September.

In a June 11 filing with the U.S. District Court for the Northern District of Illinois Eastern Division, the plaintiff, Alain Michael, accused Fairlife, along with co-founders Mike McCloskey and Sue McCloskey, of deceiving consumers by promising to provide “extraordinary care and comfort for our cows.”

“Fairlife’s and its founders’ ‘promise’ is a sham,” the complaint reads. “Their cows do not receive ‘extraordinary care and comfort.’ As a matter of routine and practice, Fairlife’s cows are tortured, kicked, stomped on, body slammed, stabbed with steel rebar, thrown off the side of trucks, dragged through the dirt by their ears, and left to die unattended in over 100-degree heat.”

A second complaint on the same charges was filed by plaintiffs Andrew Schwartz and Alice Vitiello in the same U.S. District Court on June 12.

The lawsuits stem from the release of undercover video provided by animal rights organization Animal Recovery Mission (ARM) that showed graphic abuse of cows at Fair Oaks, Ind.-based Fair Oaks Farms, which is owned by McCloskey. The footage — which shows newborn calves being beaten, kicked, and tossed, among other acts of cruelty — has led to public backlash, including organized protests at the company’s Chicago headquarters and retailers such as Family Express, Strack & Van Til, and Jewel-Osco removing Fairlife products from store shelves.

Plaintiff’s attorneys are seeking damages, expenses and costs, and to permanently enjoin Fairlife and the McCloskeys from engaging in unlawful conduct.

One arrest has been made in the case so far: Edgar Gardozo Vazequez, 36, was detained on Wednesday by local and state police authorities on misdemeanor and felony charges of beating a vertebrate animal. Two other men — Miguel Angel Navarro Serrano, 38, and Santiago Ruvalcaba Contreros, 31 — are still being sought by police.

Fairlife has responded to the video by announcing a series of changes, effective immediately. In addition to the immediate suspension of all deliveries from Fair Oaks Farms, the company said it will complete a total audit of its 30 partner farms within 30 days and will commit to performing 24 unannounced animal welfare audits on each farm every year moving forward. Employees will also undergo an annual animal welfare training certification program.

Florida-based National Beverage Corporation (NBC), the parent company of sparkling water brand La Croix, has been targeted over claims that president Nick Caporella falsely asserted that the product’s cans were free of the chemical Bisphenol A (BPA) before it had been removed from packaging.

Albert Dewjeski, a former NBC vice president, is suing his former employer in New Jersey state court for wrongful termination, claiming that he was fired in retaliation one day after he raised his concerns to senior management that Caporella had prematurely declared all cans as BPA-free. According to the complaint, the cans were “a minimum 4-6 months away” from being replaced by BPA-free versions at the time.

NBC has disputed the claims.

“False statements were made in litigation brought by a former employee seeking to extract a monetary recovery from the company,” NBC responded in a statement. “We intend to vigorously defend our company and our brands against false claims brought by this disgruntled former employee.”

Attorneys for Dejewski are seeking damages due to lost salary and benefits, in addition to emotional distress. They are also arguing the plaintiff should be protected under New Jersey’s Conscientious Employee Protection Act, a law that protects “whistleblowers” from retaliation.