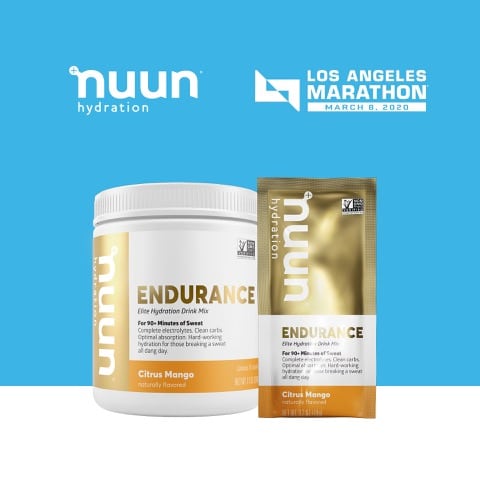 SEATTLE— Nuun Hydration is pleased to announce a new multi-year partnership with Conqur Endurance Group, the producer of the Los Angeles Marathon. Nuun, a rising Seattle based functional hydration company, will replace Gatorade for the marathon and three other major races in the greater Los Angeles area. As consumers become more ingredient-conscious, major marathons are making the switch from traditional sports drinks to new modern hydration solutions.

Steve Powell, Chief Commercial Officer for Concur Endurance Group, commented on the switch saying, “We are proud to partner with an innovative hydration company like Nuun. We feel that they are steering the future of hydration, and giving endurance lifestyle athletes far more than the traditional hydration companies have to offer. Having Nuun on course is going to be a huge asset to our runners.”

Originally conceived as an electrolyte replacement drink free from carbohydrates and added sugar, Nuun has built a strong following within the health-conscious athletic community, becoming the best-selling sports drink supplement brand in sport specialty and health food stores in North America. Nuun’s signature product is an effervescent sports hydration tablet, but this year they introduced Nuun Endurance, a powder formula designed specifically for the rigors of marathons and other long-distance endurance sports. Like all Nuun products, the Nuun Endurance formula is vegan, gluten-free, Non-GMO, Informed-Sport certified and Kosher. Runners at the Los Angeles Marathon can expect to find Nuun Endurance available on course at all hydration stations.

“The Los Angeles Marathon is just another step towards bringing clean, powerful hydration solutions to mainstream athletic audiences. We’re confident that as research continues to emerge on the science of hydration, traditional sugary sports drinks will become a thing of the past,” shared Nuun CEO Kevin Rutherford.

The Los Angeles Marathon is the 4th largest marathon in the United States and the 9th largest in the world. Conqur Endurance Group anticipates over 25,000 participants will attempt the 26.2 mile course, running from Dodger Stadium to Santa Monica on March 8th, 2020. While Nuun may have only around 75 full time employees, by its own estimates they will hydrate a total of 3,000,000 participants at in-person endurance events in 2019. The Nuun team is ready to tackle the LA Marathon and any other major events ready to make the switch from traditional sports drink sponsors.

Nuun is a hydration company on a mission to inspire more movement. Nuun electrolyte tablets and powders provide functional hydration optimized for exercise, daily health, travel, immune support and rest. Clean and Non-GMO Project verified ingredients, a refreshing taste and low sugar make Nuun a favorite with active consumers. Nuun tablets are convenient to carry and add to water, and they are better for the environment than traditional bottled sports drinks. Consumers adding Nuun tablets to their reusable water bottles helped save the shipping of over 100 million pounds of water in 2018 alone. 15-year-old Nuun is the #1 selling sports drink supplement brand in running, cycling, outdoor and natural foods stores. The Seattle-based company has been recognized by Outside Magazine, who ranked Nuun on the 2017 and 2018 ‘Best Places to Work’ lists. To learn more, visit nuunlife.com or follow them at @nuunhydration and #nuunlife.

Conqur Endurance Group creates world-class experiences that ignite passion in athletes and connect communities through the transformative power of sport. The Los Angeles Marathon is among the largest marathons in the country with 24,000 participants, thousands of volunteers and hundreds of thousands of spectators. The “Stadium to the Sea” course, starting at Dodger Stadium and finishing near the Santa Monica Pier, is one of the most scenic in the world, taking runners on a tour of Los Angeles past every major landmark. In addition to the marquee event, Conqur Endurance Group produces the Pasadena Half Marathon & 5K at the Rose Bowl, the Santa Monica Classic 5K/10K and the LA BIG 5K. Conqur also owns and operates one of the largest marathon training programs in the U.S., the LA Road Runners. Through official charity programs and strategic partnerships, Conqur supports dozens of nonprofit partners; the most notable being Students Run LA, one of the foremost nonprofit youth running programs in the nation. For more information, please visit goconqur.com