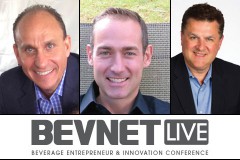 Build the category, or build the brand?

In nearly every class of trade, it’s the two-step burden for emerging brands: establishing that there’s a relevant argument for a retailer to make space for a certain category, and then pivoting to move from growing the category to emphasizing your own brand.

It’s might be the normal competitive calculus for new products, but it’s of key importance: the execution of an initial approach to retailers, and then the timing for when a company should try to stand out from the competition in the shelf set that your category argument has helped to pull together, will determine whether your particular innovation will become the leader or part of the pack, whether a brand has regional recognition or national distribution, whether it’s ultimately regarded as an innovator or as an also-ran.

For BevNET Live in Santa Monica, this process will be examined by a special panel of three beverage entrepreneurs who have all pioneered new, fast-growing product categories within the current beverage market, all of which have been able to also create a distinct sense of brand. With cases discussed by Mark Rampolla, the founder of Zico coconut water, Jim DePietro, the former COO of BluePrint, and Neil Kimberley, the VP of Strategy and Brand Development at Essentia Water, the panel will offer the audience three separate perspectives on the ways brands can create new category visions while simultaneously introducing those key “points of differentiation” that allow sustainable growth as the category coalesces.

Part selling, part marketing, part retail engineering, the practice of category development can help to create logical space for new products in the store — but it’s then essential to become the occupant of that new space when the consumer arrives to shop. This discussion will help brands that are seeking their first placement or seeking their edge against the competition.

Jim has extensive and successful C-Level leadership and general management experience in the consumer products industry.  As the Principal of The DePietro Group, Inc., Jim provides advising and consulting services to companies in the food and beverage business.  He also works as Operating Partner in Private Equity as a consumer products space industry expert. Most recently Jim was the Chief Operating Officer of Hain BluePrint, Inc.  BluePrint is the leader in juice cleansing, an e-commerce business which under Jim’s leadership expanded its reach into retail channels creating the ultra-premium cold pressed juice segment of the beverage category.  Jim joined the BluePrint founders and successfully ramped revenue and EBITDA allowing for a successful exit to Hain Celestial Group, Inc.

Previously, Jim led and managed the Healthy Beverage Company as the Chief Executive Officer.  The Healthy Beverage Company markets STEAZ natural and organic ready-to-drink tea based beverages.  Jim was brought into this business with the Private Equity firm Inventages to take it from a co-founder start-up to formidable company and brand.  Prior to joining The Healthy Beverage Company, Jim was the Executive Vice President at Ideal Snacks; a developer and contract manufacturer of natural and organic snacks. Jim spent the majority of his career with Unilever, one of the largest companies in the consumer products industry.  Jim was a senior Unilever executive working on the Pepsi Lipton Partnership, a strategic joint venture between Unilever and PepsiCo.  As Vice President Jim’s responsibilities included sales, business development and marketing for the Lipton brand in all retail and foodservice channels.  With Unilever Jim had cross functional roles of increasing responsibility in many disciplines to include marketing, sales, general management and operations. He holds a bachelors degree in marketing and management from Temple University, Philadelphia, Pennsylvania and an Executive Management Certificate from New York University’s Stern School of Business.

In 2013 Neil Kimberley became VP of Strategy and Market Development for the fast growing Essentia Water. He is also currently an advisor for Runa and for Accel Foods.The founder of beverage consulting and advisory firm Foods, Fluids & Beyond, Mr. Kimberley began his beverage career with Triarc Beverages, first as Brand Manager on RC Cola, and subsequently as Brand Director of Snapple during the brand’s expansion of the late 1990s. After Cadbury’s acquisition of the New Age beverage pioneer, Mr.Kimberley became VP of Strategy for North American Beverage business. After leaving Cadbury in 2008, he spent time as a consultant, working with a diverse set of startup beverage brands. Mr. Kimberley also worked on strategic development for Hershey from 2012 to 2013.

Mark Rampolla was the Founder and CEO of ZICO Beverages, one of the trailblazers of today’s mainstream coconut water category. Launched in 2004, ZICO brought coconut water’s benefits to the mainstream and become the replenishment beverage of choice for athletes, celebrities and health-seeking consumers alike. Under Mark’s leadership, ZICO experienced nine years of explosive growth and became one of the fastest growing beverage brands in the world. Mark was recognized as BevnNET’s 2010 Beverage Innovator of the Year and has been featured in major media, including The New York Times, The Wall Street Journal, Fast Company, Bloomberg, CNBC and Business Week. In 2013 The Coca Cola Company acquired 100 percent of ZICO Beverages. Mark continues to consult with The Coca Cola Company on ZICO and is also an angel investor and advisor to early stage companies in the beverage, food, crowd funding and technology industries. Mark started his career as a Peace Corps volunteer in Central America and later operated businesses across Latin America and the Caribbean for International Paper. He graduated from Marquette University and earned an MBA and Masters of Environmental Management from Duke University. Mark, wife Maura, and daughters Ciara and Alexis live in Redondo Beach, California.

BevNET Live Santa Monica will be held on Dec. 8 and 9 at the Loews Beach Hotel. It is a two-day conference for beverage entrepreneurs, suppliers, distributors, retailers and investors to gather, speak, exchange ideas through interactive panels and lectures, and enhance their sales, marketing, growth and product development strategies. Attendees can tap the expertise of investors and investment professionals who can help them realize growth capital or exit opportunities, explore and discuss strategies from business owners with inspiring success stories, and otherwise absorb case studies curated by BevNET.com, which has spent a decade dedicating itself to careful reporting on the fast-moving beverage industry. More than just a conference, BevNET LIVE includes networking options including the BevNET LIVE Expo, beverage breaks, cocktail receptions and, most of all, community.