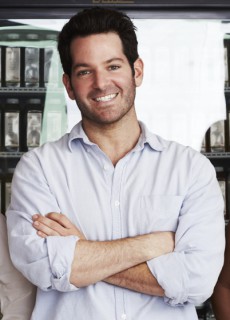 BevNET is delighted to announce that Hayden Slater, CEO &  co-founder of Pressed Juicery, a cold-pressed juice company that has grown exponentially behind its company-owned stores, will be speaking at BevNET Live Winter ’14. The event will be held at the Loews Santa Monica Beach Hotel on December 8 and 9.

Slater, who opened the first Pressed Juicery in a tiny broom closet in Brentwood, Calif., will discuss his company’s decision process with regards to its position outside the traditional packaged beverage structure, instead going direct-to-consumers via its retail stores and a robust shipping business.

The company produces cold-pressed juice daily, which has led to a vertically integrated structure that requires control over its own manufacturing, land, and transportation capabilities.

In his talk, Slater will discuss the process through which he and his partners decided to go around the the supply chain and route-to-market models that are traditionally associated with the beverage business — a decision that has created a disruptive, profitable model for Pressed Juicery, as well as its own set of challenges. In elaborating on the company’s strategy, Slater’s talk will allow the brands in the BevNET Live audience the opportunity to evaluate their own potential points of departure from traditional methods, and a framework for judging which methods to keep or discard.

BevNET Live is Less Than Four Weeks Away! Are you Registered?

In 2010, Hayden Slater and friends Hedi Gores and Carly de Castro converted a former broom closet on San Vicente Boulevard in Brentwood into the first Pressed Juicery boutique. By selling juices created from the highest quality seasonal  products in inviting stores and relying on word-of-mouth for advertising, Pressed Juicery soon developed a passionate following that

A native Angeleno, Hayden Slater attended New York University for filmmaking. After graduating in 2006, he returned to L.A. to work for HBO as a writer and producer. Four years in, Slater discovered that the stress of working in the entertainment industry had taken a toll on his physical and mental state, so he purchased a one-way ticket to Southeast Asia in 2009, embarking on a mission of adventure and self-discovery that began with a 30-day cleansing. He returned to L.A. wanting to sustain his transformation and weight loss, and that’s when he found the clarity and energy he was looking for in cold-pressed juice.

In July 2014, Slater, Gores, and de Castro also introduced their first book, JUICE: Recipes for Juicing, Cleansing & Living Well, a lushly illustrated and accessible guide to juicing and juice cleansing, featuring the shop’s most popular juices and other beverages. When he’s not growing the business, Slater enjoys hiking and sailing. He is active in One Voice L.A. and Baby2Baby, nonprofit organizations assisting low income households.

BevNET Live Santa Monica will be held on Dec. 8 and 9 at the Loews Beach Hotel. It is a two-day conference for beverage entrepreneurs, suppliers, distributors, retailers and investors to gather, speak, exchange ideas through interactive panels and lectures, and enhance their sales, marketing, growth and product development strategies. Attendees can tap the expertise of investors and investment professionals who can help them realize growth capital or exit opportunities, explore and discuss strategies from business owners with inspiring success stories, and otherwise absorb case studies curated by BevNET.com, which has spent a decade dedicating itself to careful reporting on the fast-moving beverage industry. More than just a conference, BevNET LIVE includes networking options including the BevNET LIVE Expo, beverage breaks, cocktail receptions and, most of all, community.