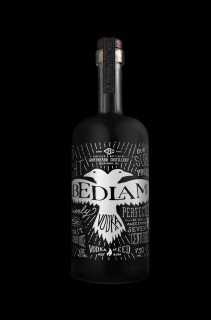 DURHAM, NC  (April 13, 2017) — North Carolina based Graybeard Distillery is on track to turn the spirits industry on its head with the upcoming release of Bedlam Vodka, a new spirits brand distilled from rice. Bedlam will make its first debut at the 2017 Wine & Spirits Wholesalers of America’s Convention & Exposition (WSWA) in Orlando, FL on April 18th-21st, 2017 at booth #1510 in the Mediterranean Ballroom Exhibit Hall.

At the booth, distributors and attendees will have an opportunity to sample the product, learn about Graybeard’s unique distillation process, and be introduced to the Bedlam brand and its backstory. In addition to its booth presence, Bedlam Vodka will also be competing in WSWA’s Brand Battle as one of 6 finalists selected out of hundreds of submissions to make a live presentation to a panel of celebrity and industry judges.

“We are excited to introduce Bedlam Vodka to such a prestigious group of industry influencers at WSWA,” says Graybeard CEO, Brandon Evans. “After years of dissatisfaction with many vodka’s on the market, we came together to create a spirit based on our philosophy that vodka need not burn.”

“As a rice-based vodka with a deep Irish heritage, Bedlam is a clear departure from the norm and a disruptor in the very “me-too” Vodka category,” said Head Distiller Scott Russ. “Bedlam vows to be a brand that rallies the trade and consumers around the power of a better alternative.”

Bedlam Vodka will be available at North Carolina ABC stores, as well as various bars and restaurants across the state beginning in May, followed by launches nationwide.

Located in Durham, Graybeard is the largest grain to glass distiller in North Carolina. Using a process perfected by Irish ancestors over the past seven centuries, they created Bedlam Vodka – A Drinkable Spirit. Distilled from rice, Bedlam offers a smooth, “drinkable” quality not found in other vodka brands. For more information on Graybeard Distillery and Bedlam Vodka, visit www.bedlamvodka.com or follow Bedlam Vodka on social media at @BedlamVodka.