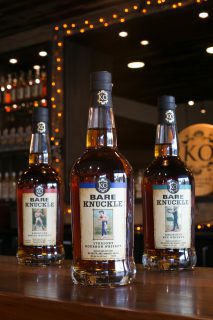 MANASSAS, Va. — In a time-honored maritime tradition, the proud Co-Founders of KO Distilling in Manassas, VA today rang a merchant ship’s bell celebrating the completion of a $900,000 expansion which has more than tripled their production capacity and will create more jobs.

“It’s great to see this expansion come to fruition,” said Mayor Harry J. Parrish II.  “We look forward to the growth and future opportunities that this brings.  The KO Distilling story is an inspiration to other entrepreneurs and great accomplishment for the City of Manassas.”

“This is an exciting day for the KO Distilling Family, our customers and suppliers,” said Co-Founder Bill Karlson.  “Thanks to the support of the state and local governments, we will now be able to triple our production. As a grain-to-glass producer of local spirits, this also means we’ll be tripling the amount of grain we buy from neighboring Virginia farms.”

“Distilled spirits is a volume industry, and until recently, our production has been limited to a batch approach,” said Co-Founder John O’Mara. “Our new column still enables continuous distillation, and as a result, we will be able to produce more and keep up with the increasing demand for our award-winning portfolio.”

In addition, the KO Distilling was able to make improvements to  their VA ABC Distillery Store and tasting room, which boasts unique enhancements such as a stunning feature wall and overhang created from charred bourbon barrels.

KO Distilling was founded three years ago by long-time friends Bill Karlson and John O’Mara (the “K” and the “O”), who were classmates at the U.S. Merchant Marine Academy. Ground was broken on the existing facility in late 2014 and the Distillery opened its doors nine months later. Initial annual production was 225 barrels, and as a result of the recent expansion, KO expects to produce more than 800 barrels/year.

KO Distilling is located at 10381 Central Park Drive, Suite 105, Manassas, VA  20110.  KO spirits are available at retail outlets in Virginia, the District of Columbia, Maryland and Delaware, as well as package stores for the U.S. Navy, the U.S. Marine Corps and the U.S. Coast Guard.  For more information about the craft distillery, go to www.kodistilling.com.