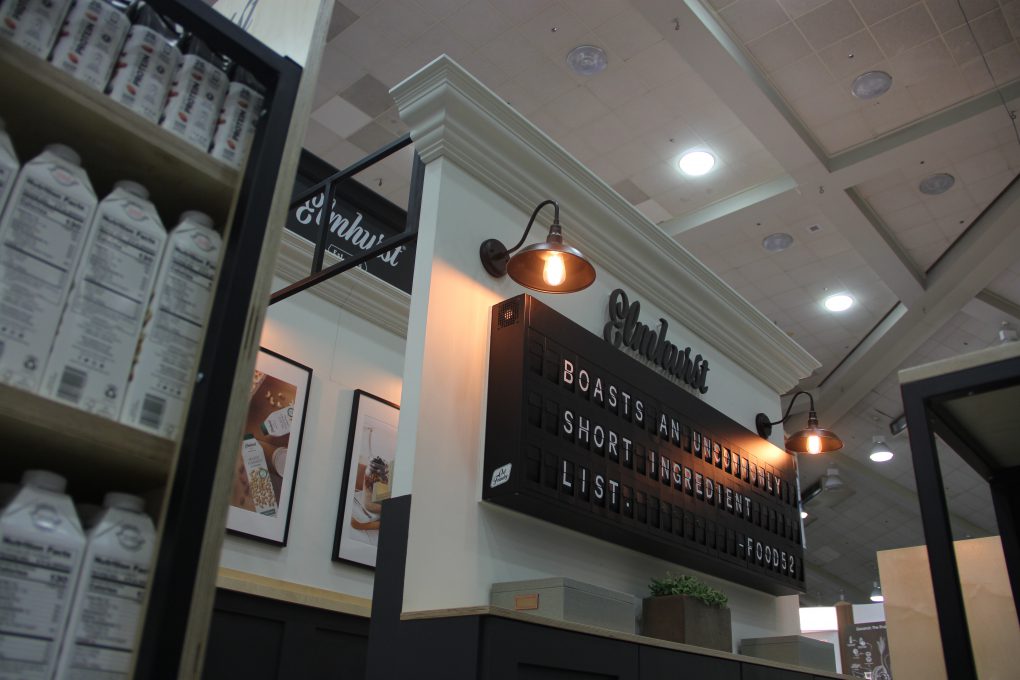 PHILADELPHIA, Penn. – Natural Products Expo, the world’s premier trade show for the organic and healthy products industry, brings together thousands of brands, buyers, entrepreneurs, investors and experts from around the world. But with over 1,500 brands on display, it’s a challenge for companies like Elmhurst 1925 – which sells nut and grain milks made with six simple ingredients or less – to stand out against their competition.

For this year’s Natural Products Expo East in Baltimore, Elmhurst 1925 wanted to step up their game and create a cohesive booth display that would seamlessly fuse eye-catching technology with back-to-roots branding. To fulfill their branding goals, they enlisted agency Humid Creative, which recommended that they source an attention-grabbing Split Flap Display from Oat Foundry.

“Split flap displays naturally create a degree of anticipation,” Will Mazzei, Product Designer at Humid Creative Agency said. “People passing the booth hear the flapping sound of the display in motion and turn their heads. There is a natural curiosity that connects them to your content in a way that other displays don’t. We wanted to draw people in with a medium that allowed us to tell a story, and generate excitement about that story. The Split Flap display checked all of those boxes.”

Humid Creative connected with Philadelphia-based engineering agency Oat Foundry – the only Split Flap display manufacturer in North America – to rent a three row by twenty-four column Split Flap display to serve as a key piece in Elmhurst 1925’s strategic booth design. They positioned the display to sit front and center in the Elmhurst 1925 booth, displaying a rotation of customer testimonials and relevant quotes, switching each minute in an automated loop.

“We worked with Oat Foundry on a plan that allowed us to rent the display, ship it to the show, mount it, and take it down, all within our budget,” Mazzei commented. “They were very accommodating to our needs – despite the fact that we were using it for only a few days.”

Once the display was mounted, the Elmhurst team scheduled messages in Oat Foundry’s Web App, which feeds both automated and real-time content, directly to the Split Flap. They simply typed the messages they wanted in rotation, and set them on a timer before the show’s start. From here, the messages rotated on their own for the duration of the Expo.

“In addition to the pre-configured content, it was easy to throw in new messages or quotes on-the-fly to impress a customer at the booth,” Mazzei added. “Day to day, we continually put in new messages, which really ‘wowed’ visitors and created an element of intrigue.”

All in all, the unique design element significantly contributed to the brand’s booth traffic during the Expo. “The addition of the display not only incorporated an exciting element to Elmhurst’s booth design, but also ensured that they stood out against the thousands of brands and companies on display at the exposition,” Mazzei concluded. “It created a unique moment for Elmhurst that contributed greatly to their success at the show.”

Founded and operated by Philadelphia natives, Oat Foundry is an agency of engineers that design and build cool stuff for brands and companies. From Split Flap Displays to an industrialized cold brew plant – the company is a fully capable engineering design studio in a prototyping and light scape manufacturing facility. Oat Foundry has become the world’s leading provider of Split Flap displays, with displays in operation domestically and internationally, with installations in the United States, UK, Costa Rica, Mexico, Canada, Hong Kong, and Azerbaijan.