Amazon Jungle is a line of acai berry based beverages that, on the surface, appears to follow the footsteps of other acai drinks. 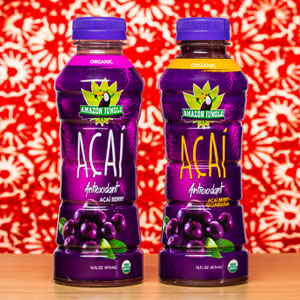 This starts with the product’s branding. Featuring a purple base color and pictures of acai berries, it looks similar to other products that are or have been on the market. In fairness, it is the logical way to brand an acai product -- just as orange juice almost always features orange or oranges. In any event, this does make it feel somewhat commoditized, especially since the Amazon Jungle logo is quite small.

We had more or less the same reaction when we sampled two varieties: Acai Berry, which appears to be their flagship flavor, and Acai Berry + Guarana, which, thanks to the natural caffeine content of guarana, is presumably going to be marketed as an energy blend.

The taste of both of these flavors was quite similar, with a gritty base of acai that has been given a rather hefty dose of sugar. The products are sweet (26g of sugar per 8 ounces) and pleasing to the palate, but, on the other hand, a bit heavy -- to the point where we’d be hard pressed to finish an entire bottle. Furthermore, they don’t really state what the differences are between the two (at least not on the bottle), so that could present a situation that’s confusing to the consumer.

As far as the functionality goes, this, too, isn’t really described in a way that’s easily understood by the consumer. This is an issue that has plagued acai products, as the majority of the pitch is about having more antioxidants than other products, which doesn’t tell the consumer how those extra antioxidants are going to perform differently or better. That said, we’d suggest that Amazon Jungle put more emphasis on the vitamins, omegas, and protein.

So where does this leave us on Amazon Jungle? Well, we feel strongly that they need to refine how they present the brand. Specifically, they need to create something that visually connects with the consumer such that they want to buy this brand over others. Right now, this feels too much like a value priced product that is going to have a strong time getting a following. And it wouldn’t hurt if they dialed down the sugar inside the bottle, too.