Blackeye Roasting Co. is a Minnesota-based purveyor of nitro cold-brewed coffee that is available in both cans and kegs. The products are available in Blackeye Cafes as well as in a variety of retail outlets.

For the purposes of this review, we’re taking a look at Blackeye Nitro Cold Brew as well as their White Chocolate and Nitro Cocoa offerings. All three are packaged in 12 oz. slim cans that feature a black sleeve label and a painted black top. 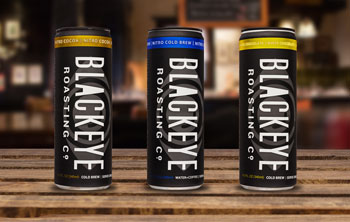 Starting with the flagship Nitro Cold Brew, the product is a well-executed nitro cold brew that is on par with other unsweetened/unflavored products that are doing the same. That said, it’s bold, smooth, and, once shaken, pours with a nice cascade texture. However, it’s hard to see anything standout about the liquid itself.

For the other two SKUs, Blackeye has gone all in with chocolate, which is definitely not an approach that we recall seeing elsewhere. Despite going  with White Chocolate and Nitro Cocoa, these flavors are, frankly, pretty nuanced in their differences. In both offerings, there is the subtle flavor of chocolate, a note of coconut from the added coconut creamer, and a mild amount of sweetness to the tune of 13g of sugar per can. These flavors are, at least to us, more memorable than the flagship offering; nevertheless there probably isn’t the need for both of them.

On the outside, Blackeye’s appearance is bold and in-your-face with branding that is slightly reminiscent of an energy drink -- an approach supported by the brand’s tagline, “Wake up with a Blackeye.” Clearly, the brand is trying to have some edge, and, at least from an aesthetics perspective, we think they’ve done a good job. But it’s hard to say whether this type of positioning creates a message that’s appealing to masses.

Regardless, we have one place where we think the packaging could be improved: the callout for the flavor, which is easy to miss.

In the end, we think that Blackeye Roasting Co. has successfully joined the growing ranks of high quality ready-to-drink nitro cold-brewed coffee brands. While it still has room to grow for the brand to be at the top of that segment, we think they’ve done a nice job creating coffee that’s enjoyable and a branding approach that’s unique.