BRWD is an upstart line of energy drinks that is made exclusively with naturally sourced ingredients, including barley malt extract.

The product line is launching with two SKUs: Cherry + Rhubarb and Citrus + Ginger. Both are packaged in a slender 12 oz can and feature a colorful label with a modern design. The name “BRWD” and the water drops surrounding the logo definitely imply a connection to brewing, so our immediate thought was that this would be a cold brew coffee based offering. But alas, it is not. 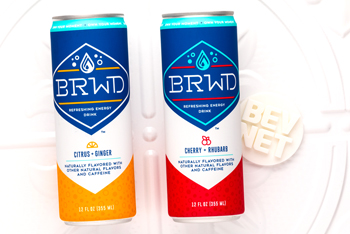 The use of barley malt extract, which is both an ingredient used in beer brewing and something that is marketed as a natural sweetener, is where the “BRWD” name comes from. In the case of the Cherry + Rhubarb variety, you can definitely taste the barley malt extract and the earthy sweetness that it adds (it’s a bit less prominent in the Citrus + Ginger variety).

Both varieties also contain added sugar, natural flavors, and natural caffeine. The end result is a line that has between 110-130 calories, 20-23 g of sugar, and 71 mg of caffeine (this is not disclosed on the can, but it should be).

Beyond that, there are definitely flavor differences between the two. Cherry + Rhubarb contains 22 percent juice (cherry and lemon) and as a result has a more fruit-forward flavor. While it's hard to distinguish the rhubarb flavor, which comes from added rhubarb extract, the combination of cherry and lemon is quite nice and very drinkable. On the other hand, Citrus + Ginger has a more “traditional” energy drink flavor. While it still has 6 percent  juice (from lemon juice), there isn’t really a ton of ginger flavor.

In the end, we think they’ve created flavors that are palatable and could be enjoyed by a  broad audience. However, we feel as though their desire to bring a “refreshing new perspective and energy,”as stated on BRWD’s website, comes through in what they’ve created.

We’d largely say the same about the appearance of the product. While we think that they’ve done a nice job with the look and feel of the logo, our previously stated concern about “BRWD” being misinterpreted as a coffee product still exists. Beyond that, we think that BRWD needs to  better communicate the brand’s story and why the product is different. Looking at the front panel, it’s not overly obvious or clear as how this product is different than what’s already out there.

In its current form, BRWD feels like something that’s trying to be a replacement for a traditional energy drink,as opposed to an alternative as a mate or a guayusa product might be. To that end, it’s a fine choice, but we think this is a category that has proven to be a challenging space  for upstarts to gain traction.