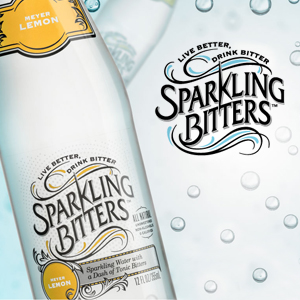 Sparkling Bitters, made with a blend of sparkling water and a dash of tonic bitters, is an unsweetened zero-calorie line of sparkling beverages. In terms of sparkling beverages, it’s a unique and interesting concept: the base of the drink is basically a lighter cousin of tonic water. This was done not only to create a unique flavor profile, but also to provide the consumers with something that “promotes digestive health” as the bottle states.

Currently available in four varieties, including Classic Aromatic, Pear Ginger, White Peach, and Grapefruit Mint, the products are all bitter at their base thanks to added gentian root. It’s crisp and cleansing to the palate, which makes for a drinking experience that’s unlike other sparkling beverages on the market today. While there are definitely similarities in flavor to tonic water, it doesn’t have the sweetness or the quinine, so Sparkling Bitters has a much lighter taste.

To that end, this product takes a sip or two to get used to, but then it’s easy drinking afterwards. We really love that the product is loaded with flavor, but doesn’t have calories or added sweeteners. The question for this product is whether it will be more successful as part of the soda, sparkling water, or mixer set -- we’re honestly not sure of the answer.

As for the flavors, some of them are more successful than the others. The Classic Aromatic, which has no added flavorings, is the most intense and full-bodied flavor in the lineup. It’s balanced and enjoyable and it has the most palate cleansing effect of the bunch. In terms of the varieties with added flavorings, we found the Grapefruit Mint to be the most enjoyable by far. This is the result of using flavors that are naturally not very sweet (unlike pear or peach) and that complement the underlying bitter flavor. It is our far and away favorite offering of the bunch. With the other two, we feel as though some refinement is needed.

Packaging is a 12 oz. glass bottle that looks very much like a bottle of seltzer or soda. The product has a clear label with black lettering, which isn’t the easiest thing to read, but the design looks polished and professional. They could, however, tighten it up. If they could reduce the amount of text around the center of the bottle, that would certainly help as there are a few too many things competing for the eye. Still, we feel as though the look of the product is inviting and intuitive, which is always a plus for something

Overall, Sparkling Bitters has come out of the gate with something that has classic roots, but very much feels like a new and innovative concept. While there’s room to tweak and improve, the concept and overall execution are something that are certainly market ready and on trend.