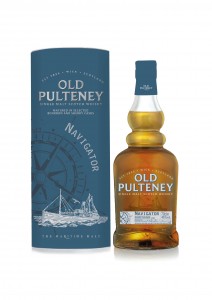 New York, NY (PRWEB) September 11, 2013 — Old Pulteney Single Malt Scotch Whisky announced the release of ‘The Navigator’, the newest addition to its distinguished portfolio. Dedicated to the sailing community and the skillful individuals piloting ships safely across the seas, ‘Navigator’ pays homage to its birthplace while offering Old Pulteney fans an exciting, limited-edition expression true to the malt’s award-winning character.

Referred to as “The Maritime Malt,” Old Pulteney embodies the seafaring history and heritage of Wick, Scotland, where it is distilled. The distillery was founded in 1826 by James Henderson at the height of Wick’s herring boom. It lies in the heart of “Pulteneytown,” which was settled during its heyday as one of the largest and most important herring fishing ports in Europe. Ships carrying more than 7000 workers, and whisky drinkers, navigated to and from its shores during that time.

While advancements have been made in production, Old Pulteney maintains its integrity by carefully crafting every drop of whisky using time-honored processes. As great navigators still look to the sun, the wind and the stars, Old Pulteney relies on its traditional methods and unique stills. The bottle is a reflection of the stills’ pot belly shape.

Navigator is honeycomb in appearance and full-bodied with bursts of honey, cocoa and oranges. Its long-lasting, spicy finish delivers notes of the salty and fresh air of the North Sea, located right outside the Old Pulteney distillery. Navigators across the world will find a dram as pleasing as a red sky at night – as the old saying goes: “Red sky at night, sailor’s delight. Red sky at morning, sailor’s warning.”

“As such an integral part of the rich maritime heritage of its birthplace and as the Official Scotch of US Sailing, we’ve worked to bring Old Pulteney’s brand to life through various partnerships and promotions,” said Patrick Graney, President of International Beverage, USA. “It is only natural Old Pulteney also release a malt that truly celebrates that community and the skilled people within it.”

Now in its second year, the Old Pulteney Maritime Heroes Award was also launched to commemorate stand-out individuals associated with the maritime lifestyle. The award recognizes men and women across the United States who have made outstanding contributions to the sport of sailing and/or their local sailing communities.

Navigator features special packaging including an illustration of a compass, an essential tool in the art of navigation, and Old Pulteney’s traditional herring drifter. Aqua blue fills the background, further invoking a connection with the sea. Old Pulteney Navigator is available in select markets across the U.S. at a suggested retail price of $49.99. The core Old Pulteney line includes a 12 year Old, 17 Year Old and 21 Year Old. Old Pulteney 21 Year Old won the prestigious Jim Murray Whisky Bible, World Whisky of the Year in 2012. Visit Old Pulteney on Facebook or at http://www.oldpulteney.com for more information.

Old Pulteney is produced by International Beverage Holdings, Limited. (http://www.interbevgroup.com) IBHL was established in 2005, as the international arm of ThaiBev, one of South East Asia’s leading alcohol beverage companies. With a network of regional offices in Asia, Europe and North America, the company is responsible for the production, sales, marketing and distribution of a portfolio of premium global brands in more than 80 countries and territories. The company’s success is built on a strong understanding of local cultures and markets along with the creation of a global operational network.