Los Angeles, January 26, 2016 — Greenbar Distillery today announced the launch of SLOW HAND Six Woods whiskey into nation-wide distribution. The 11-year-old craft distillery, which specializes in full-flavor spirits and bitters, has been tinkering for the last five years with a technique to add more interesting flavors to whiskey without going beyond the confines of grain, wood and time. It thinks it’s ready now to introduce its unorthodox creation to a broader audience. 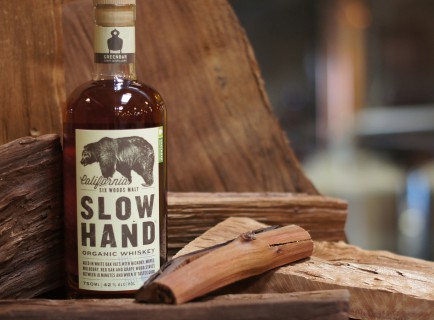 SLOW HAND Six Woods Malt starts out as a familiar, 100% barley malt whiskey. Where Greenbar makes a giant departure from the norm is in aging its whiskey. Since whiskey gets most of its flavor from wood, the company decided to broaden its whiskey’s flavor by using six different species of tree to age SLOW HAND. French white oak serves as the wood for the 1,000 and 2,000 gallon vats the whiskey sits in, while five other woods give it additional depth and complexity.

“Forests are full of delicious trees,” said Greenbar co-founder and spiritsmaker Melkon Khosrovian. “Just because all of them can’t be turned into leak-proof barrels doesn’t mean whiskey lovers should be denied their flavors. That would be like ice cream makers forcing everyone to eat only vanilla!”

To bring these new flavors into whiskey making, Khosrovian and his co-founder and wife Litty Mathew tested more than 30 wood species before settling on five whose flavors worked best with the familiar vanilla and spice of white oak. Hickory adds notes of plum while maple, mulberry, red oak and grape bring in hints of butterscotch, currants, clove and perfumed black tea, respectively. Greenbar buys its barrels from France and seasons and toasts large staves of the additional woods in house.

SLOW HAND Six Woods Malt and its rarer, fiercer sibling, Six Woods Cask, will start shipping to all fifty states this January. Suggested retail prices are $44.99 for the 84 proof 750ml bottle and $37.99 for the 115 proof 375ml cask strength.

LA-area whiskey lovers or visitors can tour Greenbar and see how the distillery makes SLOW HAND whiskey. Reservations are available at greenbar.biz/tours.