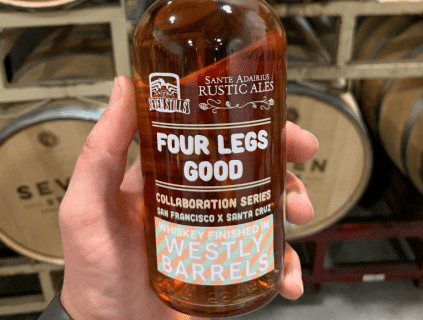 In June of 2017 Sante Adairius graciously offered us a batch of beer to distill into a whiskey.  The beer was Four Legs Good, a Belgian Quad that was fermented in puncheons and finished in oak foeders.  We decided to take the finished whiskey, roughly 150 gallons, and split it into three 50 gallon Sante Adairius beer barrels and release them over the next two years: Appreciation, West Ashley and Westly.

West Ashley is an American Sour Ale that is brewed and aged in wine barrels on apricots.  Westly is a reinterpretation of West Ashley that was aged on twice the amount of fruit, for twice as long.

To pay homage to their process we have been patiently aging this whiskey in Westly barrels for over 30 months (the longest age of any whiskey we have produced).

We are bottling this whiskey at bottle strength, 47%, and are anticipating a yield of roughly 400 bottles.  These whiskeys will be made available exclusively from the Seven Stills Distillery on Wednesday starting at 3 p.m. and we will have a strict limit of 1 bottle per person for $45 per 375ml bottle.

Additional bottles will be held on-site for in-house consumption only by the glass.