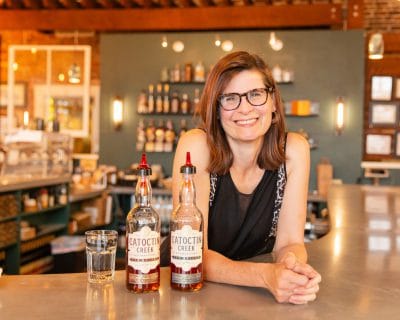 PURCELLVILLE, Va. — Becky Harris, co-founder and chief distiller of Catoctin Creek Distilling Company, has been appointed the American Craft Spirits Association (ACSA) President of the Board of Directors. Harris has served as a member of the Board of Directors since last May, where she was charged with appointing leadership to its governing committees.

“The craft distilling industry has never faced such challenging times,” said Harris. “It’s an incredible honor to be chosen as president by my fellow board members, a group of incredible leaders within our craft distilling community. I’m excited to build on ACSA’s technical and legislative leadership to help our community of more than 2,000 craft distilleries in any and every way possible to recover and thrive.”

As head of the ACSA COVID-19 task force, Harris has been instrumental in helping to build and implement sanitizer best practices. By working with the EPA and FDA to understand and streamline bureaucracy, she has been able to swiftly educate distillers across the nation, while making sure her own distillery team stays compliant and safe.

Following her graduation from the University of Wisconsin, Harris worked as a chemical engineer for companies including Amoco, YDK America, and CIBA, specializing in industrial processes and production systems before opening Catoctin Creek with her husband, Scott, in 2009. As the first distillery in Loudoun County since Prohibition, Catoctin Creek’s flagship Roundstone Rye has won top prizes internationally.

At Catoctin Creek Distilling Company, 120 W. Main St., True Craft is Inspired by Tradition.?Founded by Scott and Becky Harris in 2009, Catoctin Creek made a name for itself as the first legal distillery since Prohibition in Purcellville, Virginia’s Loudoun County. The craft distillery is home to Virginia’s most-awarded whisky, Roundstone Rye, which has been presented gold medals across the globe and stands out through its old-world production methods. Catoctin Creek prides itself on sourcing rye whisky, gin, and seasonal brandy from local and organic grains and fruits, with spirits available in 26 states and 3 continents. The Harris’ intricate attention to detail results in high quality internationally acclaimed products, including seasonal releases and private cask offerings, that recognize the true craft of Virginia spirits. For more information, call (540) 751-8404 or visit CatoctinCreekDistilling.com. Follow Catoctin Creek on Instagram, Twitter and Facebook.

The American Craft Spirits Association (ACSA) is the only national registered non-profit trade association representing the U.S. craft spirits industry. Its mission is to elevate and advocate for the community of craft spirits producers, and membership in ACSA is open to anyone. ACSA is governed by a Board of Directors elected by the eligible voting members of the Association. For information about ACSA, call 202-669-3661.