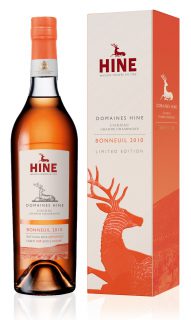 Bottled only in vintages deemed exceptional, each release in the Domaines HINE Bonneuil collection showcases a single unblended harvest that exemplifies the essence of Grande Champagne, Cognac’s most desired growing region and home to the village of Bonneuil where the HINE House vines flourish. One of the few houses in the Cognac region to have its own vineyard, the quality of Ugni Blanc grapes harvested at Domaines HINE contributes to the fine and delicate style of HINE cognacs. The aromatic richness comes from the exceptional limestone-laden soil, careful tending of the vines and precise timing for harvesting, which are further enhanced by distillation and aging in French oak barrels.

“At HINE, we believe that a great cognac is first and foremost a great white wine,” said Eric Forge, HINE Cellar Master. “Our Bonneuil range beautifully illustrates our philosophy by showcasing a singular expression of grapes harvested from one place and one vintage. Considered the greatest vintage of the 2000-2010 decade in Grande Champagne, 2010 afforded favorable weather conditions, excellent acidity in our fruit, and a highly distinctive expression of cognac, which I am delighted to share under the Bonneuil 2010 label.”

After the inaugural release of Bonneuil 2005, a warm year which expressed bountiful fruity and floral tasting notes, Bonneuil 2006 emerged from a vintage marked by unpredictable weather patterns with rich, dominant fruit notes and a subtle, elegant mineral tension. Bonneuil 2008 hails from a vintage that delivered a well-rounded harvest with aromas of fresh cranberries and the hallmark smoothness of mountain honey.

While the 2007 and 2009 harvests did not meet the HINE team’s standards for these stringent single-estate expressions, the release of Bonneuil 2010 delivers a masterclass in the art of exceptionally expressive single vintage, single estate cognac. Aged in oak casks for a decade, it is lively on the nose with aromas of mandarin, tangerine, wild peach, and toasted bread. Overflowing with freshness, this elegant release demonstrates remarkable tension and great concentration, which is proceeded by a long and lingering finish.

“Hotaling & Co. is pleased to offer this unique limited release within HINE’s dynamic portfolio of cognacs,” said Dan Leese, President and CEO of Hotaling & Co., U.S. importer of HINE Cognac. “With more than two and half centuries of experience, the House of HINE continues to innovate and push the category forward with rare offerings such as their coveted Bonneuil collection.”

For more than 250 years, HINE has followed the traditions of founder Thomas Hine, who traveled from England to France to learn how to make the world finest bespoke cognacs. Today, HINE is internationally acclaimed for its blends, vintage and extra old cognacs and takes pride in its unequalled collection of exceptional cognacs dating back to the 1800s. The House of HINE cherishes a solid belief: that a great cognac is above all, a great white wine. The fine and delicate style is garnered by the careful growing of grapes in the heart of Cognac’s most desired areas, Grande Champagne and the Petite Champagne, and the use of wood to enhance, not mask, the eaux-de-vie’s flavors.