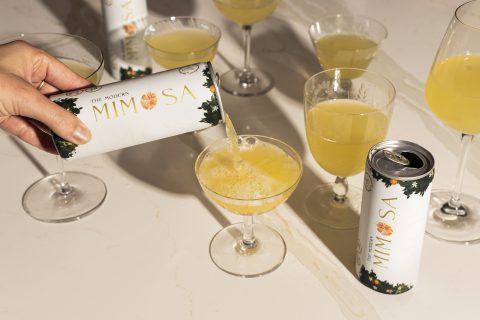 Launching December 2020, Mayne & Co. redefines the classic cocktail drinking experience with the launch of their first product: The Modern Mimosa. Co-founders (and brother-sister duo) Scott and Allie Griswold revive the classic sparkling wine and orange juice combo with an elevated and sustainable approach, utilizing a meticulously developed formula of sustainably produced wine from Italy and organic California orange juice. The 250 ML cans each contain 10-percent ABV (the equivalent of 1.5 glasses), 120 calories per serving and are sold direct-to-consumer via their website.

“We are thrilled to launch Mayne & Co and our first product, a canned mimosa,” says Chief Executive Officer Allie Griswold. “We recognized the process of mixing up a mimosa on your own can be clunky and frustrating, so we set out to simplify the process and create a product with exceptional ingredients, in a portable format, that’s ready to drink at any time and anywhere, ergo the creation of The Modern Mimosa.”

“A major focus during the developmental process of The Modern Mimosa was quality,” says Chief Operating Officer Scott Griswold. “We wanted to provide the highest quality of ingredients in order to create the utmost experience for consumers.”

Mayne & Co.’s first product is a ready-to-drink 250 ML canned mimosa. The Modern Mimosa reimagines the mimosa drinking experience by providing a portable and effervescent delight that no longer requires messy mixing. The formula, two years in the making, consists of white wine sourced from a cooperative of small sustainable vineyards in Italy as well as a splash of orange juice squeezed from organically grown California oranges. The can, made by Ball from recycled aluminum without BPAs, features a design by independent artist Lana Elanor intended to feel more like a piece of art than consumer packaging. Featuring double the alcohol content of leading hard seltzers and other canned mimosas on the market, The Modern Mimosa breaks convention without breaking glass.

While living as a 20-something in NYC, Allie became an “expert” mimosa mixer curating brunches for her and her friends in the city. She soon realized what a difference it made using fresh, quality ingredients in her cocktails, including hand-squeezed orange juice sourced from the local produce market down the street. It was after Allie served her infamous mimosas at a family gathering when she and her brother, Scott, had their “aha moment” and sparks around the idea of creating a high quality, canned mimosa began to fly.

As an industry vet with extensive background in the craft beverage space, Scott swiftly noticed that similar to craft beers, which provide a quality and full-flavored product in a portable way, a canned mimosa of the highest caliber can transform the way in which we drink the cocktail today – making it more convenient, more flavorful and more accessible. Allie, an entrepreneur whose resume includes co-founding the successful Athena Club, saw the potential in a direct-to-consumer premium cocktail company. Harmonizing the best of their backgrounds with their previous work-life experiences, Allie and Scott set out to fill the gap in the market for high-quality canned mimosas with The Modern Mimosa, a small family business rooted in sustainable production and quality craftsmanship.

Inspired by their grandmother who started her own company, Allie and Scott always knew they wanted to go into business together but never thought it would be something as fun as handcrafted cocktails. Growing up in a large family and even bigger community of friends and neighbors, sparkling wine was something that was always associated with good memories and monumental moments for the Griswold family. Echoing Allie and Scott’s mission and family values, The Modern Mimosa was designed to bring people together, bring them joy and make even the smallest of moments feel special.

The Modern Mimosa is sold direct-to-consumer in 42 states via their website in eight-packs, 16-packs and 24 packs at $10 a can and can be found in select wine wholesalers located in the Philadelphia, Pennsylvania region. For more information and to purchase, visit maynesip.com.