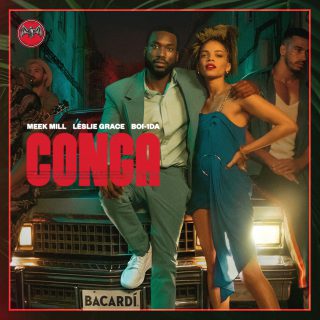 Hamilton, Bermuda – Following a worldwide call for voice and dance submissions in November – today, BACARDÍ® rum debuted the official music video and full song for the first-ever remake of global hit single, “Conga” Feat. Meek Mill, Leslie Grace, Produced by Boi-1da. Incorporating fan submissions from around the world, the world’s most awarded rum brand is once again inspiring people everywhere to do what moves them through song and dance, with the new “Conga Feat. You” campaign.

Featuring lead vocals from three-time Latin GRAMMY Awards nominee, 2020 Latin GRAMMY Awards performer and upcoming In the Heights star Leslie Grace, rap verses by GRAMMY-nominated musician and criminal justice reform advocate Meek Mill, and produced by Multi Diamond selling, GRAMMY Award-winning, “Producer of the Year” nominee Boi-1da, the “Conga” remake is a fresh twist on the hit 1985 single from Miami Sound Machine’s Emilio and Gloria Estefan. Blessed by Emilio Estefan, this new version of “Conga” is remixed for a modern audience that celebrates the beauty of self-expression and is sure to make you move your feet.

“BACARDÍ is thrilled to reveal the first-ever remake of the global smash hit ‘Conga’ and official music video. Over the past month, we closely reviewed all the incredible fan submissions from around the world and incorporated a select number into the final music video alongside the artists,” said Ned Duggan, Global Senior Vice President for BACARDÍ rum. “We’ve always seen music as such a powerful force in bringing people together, and as the world trended toward division and isolation this past year, we wanted to use music as a catalyst to bring people back together in a way that has never been done before. We can’t wait for you to see it.”

The lively full-length music video intersperses “Conga” enthusiasts’ dance moves alongside Leslie Grace, Meek Mill, and Boi-1da as they move through a vibrant Caribbean world. As the music video progresses, user-submitted dance moves begin to sync up with the artists’ choreography, culminating with the three lead artists visually pulling individuals from their own UGC worlds and inserting them into the Caribbean world, where they can all feel the rhythm of the music together.

Additionally, the official music video also boasts an impressive roster of celebrities and influencers – including 2020 Sports Illustrated Swimsuit Issue cover girl Jasmine Sanders, viral street-dance performer Lil Buck and singer, dancer and TV judge Alesha Dixon – who recruited “Conga” enthusiasts near and far to submit their dance moves and vocals when the campaign first kicked off in November. The music video also features an exciting cameo by Emilio Estefan, one of the producers behind the original “Conga” track.

To accompany the release, BACARDÍ has created an official “Conga Feat. You” campaign cocktail called the Coco Conga. A delicious cocktail to quench rum drinkers’ thirst as they dance the night away, this spin on the Caribbean classic Mojito is made with a base of BACARDÍ Superior white rum and a splash of BACARDÍ Coconut Flavored Rum.

Method: Add the BACARDÍ Superior Rum, lime juice sugar and mint to a highball glass. Press mint with a bar spook to release oil. Add crushed ice, almost to top, and churn. Top with Club Soda and crown with a splash of BACARDÍ Coconut Flavored Rum. Garnish with a mint sprig and lime wedge.

The official song release is accompanied by an extensive media buy – with a 30-second spot of the music video airing during Super Bowl pre-programming and during the premiere of “The Equalizer” after the big game. The “Conga Feat. You” campaign spot will extend through the month of February around cable originals and live sports including NHL and NBA, as well as premium Connected TV environments and surrounding relevant artists on YouTube and Vevo. In February and March, “Conga” messaging will extend to Instagram, Twitter, Soundcloud and Pandora, and Snapchat users will be able to engage with a custom choreographer lens to the “Conga” track brought to you by BACARDÍ. Lastly, fans will be able to tune into custom Genius series “Verified” and “The Cosign Live” on Twitch to learn more about the remaking-of “Conga” and engage with user reactions to the track in real-time.

About BACARDÍ® Rum – The World’s Most Awarded Rum

In 1862, in the city of Santiago de Cuba, founder Don Facundo Bacardí Massó revolutionized the spirits industry when he created a light-bodied rum with a particularly smooth taste – BACARDÍ. The unique taste of BACARDÍ rum inspired cocktail pioneers to invent some of the world’s most famous recipes including the BACARDÍ Mojito, the BACARDÍ Daiquiri, the BACARDÍ Cuba Libre, the BACARDÍ Piña Colada and the BACARDÍ El Presidente. BACARDÍ rum is the world’s most awarded spirit, with more than 900 awards for quality, taste and innovation. Today, BACARDÍ rum is made mainly in Puerto Rico where it is crafted to ensure the taste remains the same today as it did when it was first blended in 1862. www.BACARDÍ.com

The BACARDÍ brand is part of the portfolio of Bacardi Limited, headquartered in Hamilton, Bermuda. Bacardi Limited refers to the Bacardi group of companies, including Bacardi International Limited.