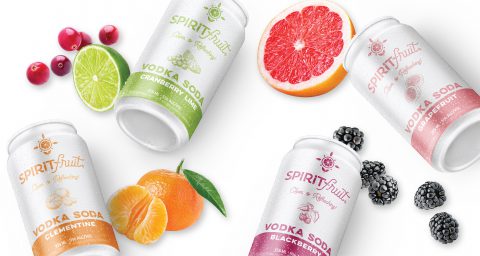 Duxbury, Mass. – Spiritfruit all-natural vodka soda makes a big splash this summer with the launch of direct-to-consumer shipping.  The recently debuted ready-to-drink cocktail made with real fruit juice can now be delivered right to the doorstep in over 40 US states.

Made for healthy, happy sipping in any setting, Spiritfruit is 100% gluten-free, made with no added sugar, and crafted with five-times distilled corn-based vodka and all-natural ingredients only.  Spiritfruit’s difference can be seen, not just tasted, when poured because there’s 4% more all-natural fruit juice than many other canned vodka sodas on the market

“It’s been such an amazing year for Spiritfruit. We’re in liquor stores throughout the country, and now with direct-to-consumer shipping, we’ll be able to reach so many more consumers,” says founder Caitlin Morris.

Cailtin launched Spiritfruit with oceanside inspiration from her hometown of Duxbury, Massachusetts. Alongside her father and brother as partners, Caitlin is on a mission to deliver a clean and refreshing drinking experience that doesn’t compromise on taste.

“The evolution and prioritization of Direct-to-Consumer (DTC) is a positive innovation born out of tremendous pressure on small beverage companies during the COVID-19 pandemic. DTC is now being talked about as a “fourth tier” addition to the traditional three-tier system. We believe that convenience will be one of the key growth drivers of the economy for the foreseeable future and Spritfruit is now well positioned to be part of that growth,” says Glennon.