Regular readers of this column (all nine of you) are aware that I’m not one to blast regulation. In fact, my knee tends to jerk the other way, believing that, grandstanding aside, the social obligations of a business mean that most regulations are worthy of strong consideration and adoption.

I have written in favor of careful regulation and scrutiny of additives and ingredient claims, as well as improving the utritional value of products while limiting their downside. On the other hand, I recently supported a pushback against extensive civil litigation against beverage companies when that litigation appears intended to enhance the lifestyle of the litigator more than the social compact. I’ve urged caution when it comes to marketing high-calorie, high-sugar products to children – particularly since I’m scared to have hyper children waiting for me at home. But I’ve also been impressed by the moves the industry has made to self-police when it comes to calorie and ingredient disclosure. 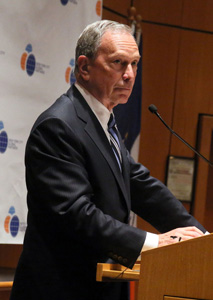 It’s in that context that I have observed the immediate response to a proposal on “supersizing” from New York Mayor Michael Bloomberg – one echoed later by my city of residence, Cambridge, Mass. – to limit the sale of beverages that have more than 25 calories per 8 oz. serving to package sizes that are 16 oz. or less. Because it’s an ordinance proposed by the city’s Board of Health, it will be fairly easy for Bloomberg to get approval, and it will fall to him to enforce the ban on the establishments the Board of Health regulates, including restaurants, movie theatres, delis and sports arenas.

Industry reaction has been predictable: the powers-that-be in the American Beverage Association and its allies, including groups representing restaurant and entertainment businesses, have been overwhelmingly against it, taking to the airwaves, putting up signs, lobbying, and organizing Astroturfed public rallies decrying the proposal. As I write this, the “Million Big Gulp March” has just finished up outside City Hall Park.

Bloomberg has been portrayed as everything from nanny to meddling mom, but from a dietary standpoint, there’s very little wrong with his basic rationale: too many calories are making too many people in New York obese, and drinks with lots of sugar are contributing to the extensive calorie load. And while the freedom to choose those calories may seem like an individual one, in fact, the overall impact of those choices is one that creates real costs for the public. It’s expensive, in other words, to fight the problems caused by a population that is unhealthily fat.

It’s the same rationale that has been applied – successfully, and with little impact to the restaurants and bars – in the case of bans on cigarette smoking.

But the supersize regulation is more complicated. For one thing, the ban would allow high-calorie milk-based products (some of which pack huge caloric loads and commensurate amounts of sugar) slide. Industry figures fighting caffeine regulation in energy drinks are used to comparing themselves to Starbucks coffees for caffeine content; that model works again when looking at calories: a 16 oz. Venti Starbucks Caramel Frappuccino, comes in at 350 calories; would make the cut. A 16.9 oz. PET bottle of Honest Tea Lemon Tea, which comes in at 80 calories per bottle, wouldn’t. Neither would a 20 oz. Vitaminwater (125 calories).

There might be some variable that allows for packaging size discrepancies eventually applied to the regulation, but as it stands now, given the nuances of package formats, the havoc this proposal will wreak on shelf sets should comprise a legitimate cause for industry concern.

Furthermore, there are inconsistencies in Bloomberg’s own finger pointing: he is a fan of the gorge-tastic Nathan’s Hot Dog eating contest and he’s cut the ribbon at Brooklyn Brewery expansions (significant because craft beer clocks in much higher calorically than comparable premium offerings). Also, under Bloomberg, New York has become the city that birthed a million cupcake bakeries and food trucks, and recently hosted the Great Googa Mooga, a culinary event that featured, among other decadent treats, Foie Gras-stuffed doughnuts.

While calorie concerns are legitimate, the super-size beverage ban, with its obvious shortcomings (free refills, just buy two instead, etc.), is a symbolic one, but it also raises relevant questions about where the line should be drawn — while also riling up an opposition that has historically been willing to work with local governments. With cigarettes, the issues were more straightforward, the villain was acting alone. Even banning trans-fats wasn’t a bad idea: again, there’s a single ingredient, and the industry tide had already turned against them. With calories, there’s a real “pound of feathers” argument: why not ban bacon in large portions? Or butter?

Both of those items are readily available – are, in fact, thriving – in Bloomberg’s New York, without threat of calorically-derived fine. But – and here’s the kicker – one just has to go to a cupcake bakery (they stick bacon in the frosting now, even) to see that there are regulations that work. Along with the trans-fat ban, one of the Bloomberg Administration’s most successful public health initiatives has been the requirement that chain restaurants display calorie counts on their menus.

Here’s the rationale behind it, straight from the Department of Health’s campaign itself:

“When people have access to calorie information, they use it. Health Department surveys have shown that when restaurant patrons use calorie information in deciding what to order, they average nearly 100 fewer calories in each meal purchased.”

Guess what? Most of those plus-sized soft drink containers – at least the RTD ones – of beverages have been offering that calorie information up for years. Extending that disclosure shouldn’t be that hard at fountains, movie theatres and stadiums. Print it on the cups. Make the industry provide all the information you think they should. But don’t enact misleading, toothless, inconsistent bans, especially when you’re still encouraging them to chase their foie gras donut with a Frappuccino.