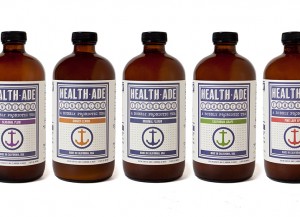 For a small deal, it certainly aroused a fair amount of attention, at least in my world. Just a few weeks ago, Los Angeles-based First Beverage Group wrote a check of undisclosed magnitude for what it described as a significant minority position in a small, local kombucha producer with the avowedly retro name Health-Ade. But the Health-Ade deal was the first public acknowledgement that I’ve noticed that serious institutional money is starting to chase this rarefied sector. Coincidentally, the same week, Health-Ade and several of its peers in this rapidly burgeoning field joined up with kombucha proselytizers Hannah Crum and Alex LaGory to launch the industry’s first trade group, Kombucha Brewers International, with plans for a Kombucha Konvention in Santa Monica, Calif., in January. So first, a private equity move, then a convention. Does this herald that kombucha, all of a sudden, has come of age?

That may be a stretch at this point, but the segment certainly is becoming tantalizingly visible even to the beverage conglomerates. Some of that Health-Ade investment, after all, came from the Coca-Cola Co. via its stake in the First Beverage fund; also, there have long been rumblings that kombucha-like probiotic brand KeVita has dallied with PepsiCo’s incubation arm in Southern California. If you put aside all the distracting talk of “scoby” and “mushrooms,” kombucha has a lot going for it: health benefits via the high probiotic content, a broad palette of techniques that allow individual marketers to differentiate their liquids much the way craft brewers can (and craft soda purveyors can’t), a growing on-premise component, and a burgeoning sense of grass-roots authenticity that comes of having an active network of home brewers who swap their scobies. (OK, hard to avoid that word.)

Of course, the segment has produced one mega-brand already, GT’s, which so far dominates with its core GT’s and juice-inflected GT’s Synergy, and has showed agility by early clambering aboard the chia bandwagon with a well-received subline. It’s defined the segment so far, and attained the sorts of velocities we’re not supposed to expect in the natural food channel. In fact, I believe GT’s and the kombucha segment deserves credit for helping to elevate the overall beverage segment, much in the way Starbucks once elevated a dreary coffee sector. It’s offered a refreshing burst of premium positioning at a time that even the Whole Foods grab-and-go cooler seems to have become a price promotion battlefield. Arguably, kombucha’s premium but not scary-premium price softened up consumers for the really premium prices charged by the new breed of high-pressure-processed (HPP) juice and cleanse purveyors like BluePrint, Evolution Fresh and Suja.

But kombucha also comes with massive challenges to widespread adoption. Many items still carry a vinegary taste that may be a badge of authenticity to core users but is a turn-off to mainstream consumers. The artisanal nature of production, and the difficult-to-control risk that continued in-bottle fermentation will take the product above acceptable alcohol content levels, is another disincentive for the majors to play. (I’m sure you all remember the massive recall of the category undertaken by Whole Foods in 2010 after several brands, including GT’s Synergy, were found to have consistently excessive levels of alcohol. And I do worry that GT’s continues to be a bit too cavalier about this issue, which I don’t believed it’s fully resolved.) Another challenge, and a sizable one: the need for the products to be kept refrigerated from plant all the way to retail.

Are these insuperable obstacles? I suspect not, in part because so many of the most intriguing beverage sectors today – from cold-brewed coffee to HPP juices – share them that it’s in the industry’s interest to find ways to resolve them. On the distribution front, for instance, it occurs to me that beer wholesalers could prove a workable route to market. After all, they understand fermented products (quite a few beer wholesalers were among those eager to take a flier on the German fermented soda Bionade, though that company’s U.S. push disintegrated before it really got started) and many have been putting in cold capacity to accommodate their craft beer kegs. With kombucha also proving an ancillary sell to their more cutting-edge on-premise accounts, it may make sense. (My local multitap house in Manhattan, Dive Bar, has kept KBBK Kombucha Brooklyn consistently on tap for two years now.) And of course, these days, beer wholesalers have both non-alcoholic and alcoholic varieties of the product to choose from.

And there’s no question that, in the hands of countless celebrities, kombucha’s profile in pop culture is rising. Ironically, there’s a good chance the massive Whole Foods recall may have given the category an awareness jolt. Hey, that hilarious “It’s Gettin’ Real in the Whole Foods Parking Lot” video has been viewed 5 million times on Youtube by now, and the rapper’s complaint that “I’ve been on edge ever since they took kombucha off the shelves” no doubt gets a lot of knowing smiles from viewers. Maybe it even gives the product an air of danger!

So who are the next winners likely to be, after GT’s? That’s a tough call. Among those looking to go broad, I can understand First Beverage’s enthusiasm for Health-Ade, with its approachable recipes, unmistakable apothecary look and links to local farms. Reed’s Inc. has made an aggressive push behind its highly drinkable Culture Club Kombucha, which is finally cracking major retailers. High Country has weathered its share of storms that rivals like Honest Tea and Vibranz didn’t. A group in Austin is intriguingly, if controversially, executing their Live Kombucha as a soft drink. But much as with craft beer, I think many winners will bubble up from the local level, as with a tiny outfit called Beyond Kombucha Artisan Fermented Tea in my burg. After all, who could resist a chance to try a Mava Roka Maple Vanilla Rooibos Kombucha Ale (with a 6.5% alcohol kick)? If things like that interest you, maybe it’s time to book a flight to Santa Monica in January for the konvention.