That’s what a five-year analysis of topline category data – infused with five years of observation of the growth and decline of specific brands – tells us.

It also gives us a way of looking at the way the overall composition of the beverage industry.

Looking at category growth and decline across the spectrum, it’s apparent that there has been momentous change in product assortments. But the proof of the power of brands lies in the overall changes they create over time in category composition: Energy Drinks, Iced Coffee, Aseptic Juices, Sparkling Water, Refrigerated Teas, and Protein Drinks have all shown massive growth around new or hot brands. Other categories have grown through competition between more than one brand.

So look at the categories that have shown the most dramatic changes in fortune, and one can tie their growth to the evolution of one or more brands; what’s even more notable is that strong brands are able to sustain their growth despite the headwinds that can come from negative trends.

One example there is sparkling water, the home of fast-growing brands like Sparkling Ice and Lacroix, but also a category that has seen declines in mature brands like Perrier, the former category leader.

At the end of 2010, according to IRI, sparkling water was a $537 million category; this year, it’s $1.3 billion. During the last four years, Sparkling Ice has grown from under $50 million to more than $350 million; other companies, including the traditionally large CSD companies, have jumped on the bandwagon, and the category has ballooned.

In bottled water, strong growth brand Smartwater has also expanded during its time in the Coke stable – at a time when former still water stalwarts like Fiji and Evian have been on the decline. Bottled water has become one of the biggest beverage categories, but it has done so while brands have traded volume and the growth curve has flattened, from $8.5 billion to $9.5 billion in five years.

Meanwhile, the effect of competition in fast-growing categories makes for even more pronounced growth, while brands that own categories tend to see those categories stagnate.

For example, Gatorade’s share of the sports drink category has remained steady between 2009 and 2014 at between about 75 and 80 percent – but the category has grown much more slowly, from $4.5 billion to $5.6 billion in the same period. Would PepsiCo want to lose that part of the business? Heck, no. But if mature categories don’t see new competition, even powerhouse brands can get dragged under. That’s why Gatorade is working so hard to stay relevant, but it’s also why a challenger brand has opportunity – categories can either ripen, or slowly rot. Consumers start to question the premise. It’s happened with CSDs, and it’s happening with orange juice as well.

For a challenger brand perspective, consider craft beer, by its very premise comprised of brands that are challenging the category’s established premise. Craft has grown at a massive clip over the past five years – while major brands Bud, Miller, and Coors have been in gradual decline. The craft category has more than doubled, to $2.2 billion (not counting on-premise), while domestic premium has pretty much run in place – and during a period when consumers really were hurting in the wallet, as well.

It’s still boom times in the energy drink cooler, however, where brands remain potent and that’s keeping the category moving, as well. In 2009, Coke had just begun to distribute Monster, and Rockstar was moving to the Pepsi system. The category stood at about $5.5 billion – sizeable, but paltry compared to the $9.2 billion it sits at today. Conversely, the lack of a challenger is starting to be felt in the energy shot category, where there’s no one else to share the regulatory potshots that 5-Hour Energy has been taking. The category has dropped by about $100 million in each of the past two years, from more than $1.3 billion at the end of 2011 to about $1.16 billion this year.

So if competition matters, where else is it happening? Look in the refrigerated vegetable juice/cocktail space, which has gone from about $36 million to nearly $100 million – small potatoes when compared to orange juice, certainly, but the ad budgets behind the kale marketing complex are just now beginning to crank into gear – at a time when new HPP entries from Suja, Blueprint and Evolution Fresh are beginning to move into mainstream coolers to take on established category growers like Naked and Bolthouse. That’s a lot of competition in a small area – but one which is fast spreading to the mainstream population. Expect a boom there similar to what happened with almond milk, particularly as those brands also grow in the smoothies category as well. There, competition between Naked, Bolthouse, and Odwalla has caused the category to grow from $300 million to $800 million – and even with Odwalla on the wane, the mainstreaming of HPP entrants will light the fuse once again.

Beyond competition, however, there are health and wellness trends that are elevating categories. America’s dairy milk consumption has barely changed over the past five years, but almond milk has grown into a category of more than $800 million. Meanwhile, interest in fermented products like kefir has caused that category to triple at retail, from about $30 million to more than $90 million.

Outside the dairy case, aseptic juices have grown gradually as a category – propelled by Vita Coco but in the face of the steady decline of products like Juicy Juice. Similar trends are happening in other refrigerated sections: the mainstreaming of GTs is creating another strong brand that will add value – how these categories are arranged five years hence will probably have much to do with how that brand performs in conventional stores. 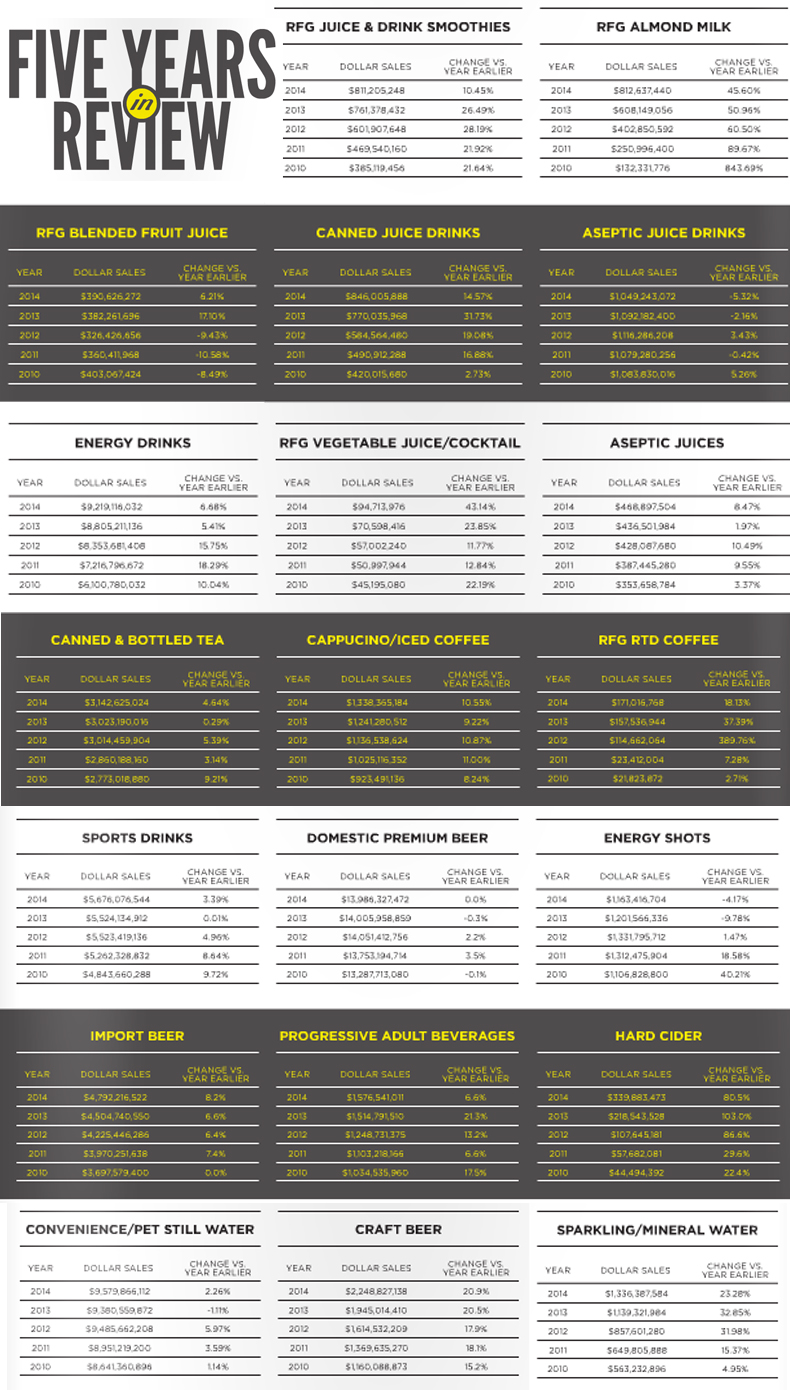