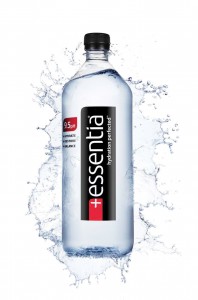 Like the record labels and talent scouts scouring the clubs of Greenwich Village – and London, Chicago, San Francisco, as well – searching for the next Bob Dylan, the fast rise of Sparkling ICE has investors, retailers, and distributors asking the same question: who’s next?

Some folks are pointing to Essentia Water. The brand is another long-term, overnight success story, bumping along for years as a small natural channel brand but climbing to prominence as the tide of alkaline water gradually rose around it. While newer brands like AQUAhydrate, NEO and Eternal Water have done much of the hard work in raising consumer consciousness around higher-pH waters, Essentia has been the stalwart, the best-selling water SKU in many natural and specialty accounts, and it appears the patience is paying off.

Michael Burgmaier, the manager director of food and beverage brands for Silverwood Partners, an investment bank in Sherborn, Mass., thinks Essentia Water compares favorably to Sparkling ICE, which took nearly 20 years to become the darling of the industry and raise the profile of parent company Talking Rain.

Burgmaier recently led a raise of $3.2 million in convertible debt for Essentia, a small investment for a brand that he believes will grow much faster in the years to come.

Scan the background of Sparkling ICE and you’ll begin to understand why Burgmaier was able to sell the deal so quickly. Not long ago, that brand also exhibited low all-commodity volume (ACV), spotty distribution and geographically restricted consumer awareness — but had the upsides of strong single-channel sales velocity and a tendency to be out of stock because of consumer loyalty.

“It’s exactly the same situation with Essentia,” he said.

Well, not exactly the same; breaking out of the natural channel and into conventional grocery is hard for many brands, and it’s certainly not the path followed by Sparkling ICE. Still, the brand’s evolution did give the dogged investment banker some pretty nice data points.

Essentia’s slogan, written on the bottle, is “hydration perfected,” via electrolytes and alkalinity. The brand has responded to 10 straight years of growth by beefing up its front office, assembling a new production facility and adding more distribution and retailers. For these reasons, investors believe that Essentia won’t just build a bridge from the natural channel into the mainstream; it’ll build a bridge, a castle and a freakin’ moat.

“We’re really hitting on all cylinders and all channels,” said one of those front office hires, Paul Curhan, who came on board as Essentia’s vice president of marketing and innovation late last year.

Essentia seems to be denting the market at a time when bottled water consumption is growing again at all levels but high-end is increasing more than commodity. As “premium hydration” — one of the catchphrases of another new Essentia hire, strategy whiz Neil Kimberley — has become a trend at retail, there’s a growth among consumers that even still water may offer more than just hydrogen and oxygen at what’s still a pretty low price. And while a profusion of alkaline and electrolyte-enhanced waters exist in the market, Essentia’s brass believe that the brand has trumped the rest of the pack by way of its proprietary electrolyte formula, a pH of 9.5, a loyal audience (approximately 75 percent female) and a hard-to-define feeling of health.

That hard-to-define idea is something of an issue, especially when you compare Essentia’s steady climb in sales figures to the fairly low understanding of the science behind the water. Curhan said that while some natural consumers have grasped Essentia’s concept, most mainstream consumers haven’t yet surpassed the surface level of buzz around alkalinity. While he says that he doesn’t think that consumers yet understand what makes Essentia different, education will continue to serve as a challenge as the brand moves into larger grocers such as Kroger and H-E-B.

Here’s another telling problem for Essentia, albeit one that the company is reading as an opportunity: out-of-stocks, a malady that also affected Sparkling Ice when it was in its own fast-growth phase.

“It’s kind of a good problem to have, but we need to fix it,” said Ken Uptain, Essentia’s founder and CEO.

Because of limited distribution, the product has occasionally been out of stock at Whole Foods and Safeway, to name a few retailers.

One place where out of stocks aren’t an issue is Amazon. Online sales are essential to Essentia, where they’re its fastest-growing channel and are responsible for 10 percent of its sales.

Still, brick-and-mortar stores are where a product moves from true believers to trendy. It’s worked in more than one outlet so far, but the problem remains — can it move from the small confines of natural/specialty into conventional success?

Take Sprouts Farmers Markets, for example, in order to understand why: not long after receiving initial placement four to five years ago, Essentia began to thrive, becoming the top-selling water at all 170 of its locations throughout Arizona, California, Colorado, Nevada, New Mexico, Oklahoma, Texas and Utah.

John Soukup, the senior category grocery manager for Sprouts, said that because the store has limited shelf space, with standard water sets standing at only 8 feet tall, Essentia typically receives three to four facings. Out of stocks happen only occasionally there, he added.

Essentia’s top SKU is its 1.5 L bottle, and more than a third of Essentia’s consumers drink more than 15 bottles per week, Burgmaier said. Uptain projects sales to jump from $15 to $20 million in 2013 to $22 to $23 million this year. Considering these factors, along with the out-of-stocks, does Essentia deserve more shelf space?

“It probably does,” Soukup said. “But it’ll never happen.”

If Sprouts had more space in its stores, Soukup said that Essentia could easily handle more shelf space. He even suggested that Essentia should launch a gallon bottle, which he called a natural progression that would comply with the brand’s all-day-consumption, stock-it-at-home philosophy (though not with the space limitations at Sprouts).

Burgmaier added that Essentia loyalists aren’t just picking up one or two bottles for the day. They’re getting a supply for the week. As Soukup and other retailers have discovered, they’re clearing out the shelf.

“The consumers are extremely loyal,” Burgmaier said. “They drink Essentia, they come back to Essentia.”

Some investors could view these hurdles as a yellow light impeding progress. But Essentia’s argument is that the brand’s current state leaves plenty of room for untapped growth.

To calibrate and focus that growth, Uptain hired a pack of business veterans and quickly bolstered a resonant brand with a team to back it. On Dec. 6, 2013, the company announced that it hired Kimberley as vice president of strategy and market development, Tahne Davis as creative director and brand manager and Curhan.

It’s a formidable group: for the past 20 or so years, Kimberley has shown his deft touch as a veteran of beverage innovation and game-planning with companies such as Hershey’s, Snapple and Runa. Davis, who has worked with brands such as Moving Comfort, a women’s fitness apparel company, and Crystal Mountain ski resort, moved from a consulting role with Essentia into a full-time position. Curhan, a brand-builder with more than 20 years of experience, contributed to the launch of Starbucks’ ready-to-drink Frappuccinos and the resurgence of the craft brewer Pyramid.

While Essentia marks new territory for Curhan, he will continue to develop the brand as a lifestyle one with a cohesive, consistent story. And as Burgmaier compares Essentia to Sparkling ICE, Curhan envisions the potential growth Starbucks realized when it went into ready-to-drink products.

“That other experience, albeit different categories, is hugely relevant to understanding how to build a brand,” he said.

The foundation of Essentia’s brand was built in the natural channel, with Sprouts serving as one its key accounts. Soukup said that Essentia has been a cooperative, malleable partner, willing to launch promotion plans and discount periods when necessary. At Sprouts, the 1.5 liter bottle sells for $1.99. Promotions range from $1 individual bottles to 4 bottles for $5.

When Burgmaier is studying a brand, measuring the potential verticality of an investment, he takes a close look at a concept that he said most companies don’t understand: baseline sales before and after promotions. He said that for companies with plans to sustain big-time growth, it’s essential that they keep climbing the baseline ladder.

The intent of a promotion isn’t just to develop spurts of interest in a brand. It’s designed to boost sales and demand and draw new consumers to the brand, he said. Then, ideally, those new consumers morph into the next wave of loyalists who talk about the brand with their friends and family, in-person and online. By doing so, a promotion injects a company’s pre-promotion baseline with a big, post-promotion lift.

Essentia, he said, has years of data that proves these post-promotion results. And the reason isn’t the pricing.

“The promotion itself is not what matters,” Burgmaier said. “The product is what matters.”

The product, and the pond, too, however. Consider the Dylan example: there are plenty of great folk singers out there who, no matter how big they got, never crossed over. For Essentia, that’s the existential crossroads.