The most popular hop of tomorrow won’t go under trellis today. That is to say, to innovate in the hops market is to play long odds. The Simcoe hop, for instance, was nearly torn completely out of the ground and discarded as a failed experiment. Perrault Farms just couldn’t sell the aromatic hop during the early aughts. Situated in Washington’s Yakima Valley, the farm invested in commercial acreage for the flower — about 40 acres worth — based on its presumed potential. But its inability to bloom in the marketplace forced the farm to face the wilted reality: Simcoe was a disappointment. 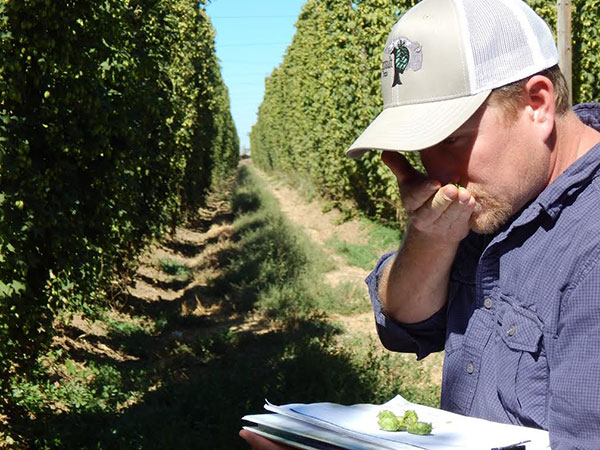 Whittled down to two acres, its doom looming, Simcoe’s extinction was delayed by a small uptick in demand. “Then it just blew up,” said Jason Perrault, the farm’s general manager and a fourth generation hop grower. “It’s been a struggle to keep up with it.” Since, it’s only grown: There’s now 2,100 acres of Simcoe planted with about 900 acres more on the way.

Surprisingly enough, in these hop forward times, Simcoe’s backstory is hardly unusual. Bred by Select Botanicals Group, (where Perrault doubles as vice president of research and development, a hop breeder managing the selection and crossing of different strains) Perrault said all experimental hops are statistical miracles. Palisade, Citra, Mosaic, Ahtanum, and Equinox, are all Select breeds he helped develop; and every one of them is an aberration. “Most of what we do is a disappointment,” he said.

Nevertheless, he and the rest of the crew at Select Botanicals – jointly owned with Perrault by BT Loftus Ranches and Carpenter Ranches – weed through the failures, forecasting a decade or more in advance how the beer drinker’s palate will evolve. But there’s more to Perrault’s gig as both a farmer and breeder than tracing the ebb and flow of the beer drinker’s taste buds and breeding to match, especially as growers and brewers alike navigate a hops market in flux.

As has been written everywhere from the Wall Street Journal to Esquire, there’s a hops shortage on the horizon; the former publication recently reported that the price for higher end hops, the kinds Perrault breeds and grows, could exceed $10 per pound by the end of this year, a direct result of too much demand and too little land to grow. To that end, Goose Island brewmaster Brett Porter figures 17,000 additional acres of hop growing land needs to become available in the next five years if the craft beer industry is to maintain its growth rate.

To do its part, Perrault Farms is undertaking a $10 million expansion effort – “A pretty significant investment,” said Perrault – to grow its acreage and harvesting facilities.

Perrault isn’t the only one making the investment. Throughout Washington, 29,021 acres of hops were strung for harvest in 2014, a 7.2 percent uptick over the year prior, according to the United States Department of Agriculture. On a national scale, hops acreage grew a touch over 11.5 percent – to roughly 39,272 acres – according to data obtained by Hop Growers of America. So at least some of the necessary land is being added. Still, Perrault says growers have unfairly been burdened with much of the blame for rising hops prices.

He sees things a bit differently, explaining “The key to a stable hop market is of course contracts at fair prices.”

“Contracts give growers the information needed to plan and expand,” he said. “Growers are actively expanding acreage and picking facilities to keep up with contracted demand, and they are doing it successfully.”

Using contracted volume as its baseline, the farms of Select Botanicals were able to produce over 100 percent of their contracted demand for Simcoe, for instance, eschewing some of the tumult surrounding the reported hops shortage.

“On the flip side, spot markets are, by definition, volatile,” he said. 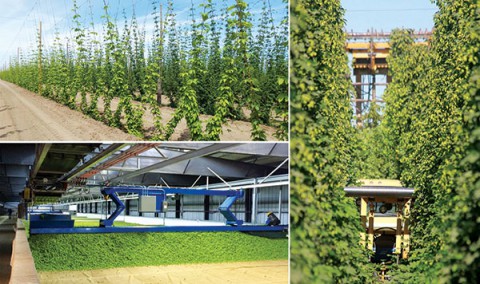 Adds Ann George, executive director of Hop Growers of America, “Do you have a shortage just because a brewer that happens to want the latest and hottest new variety – of which there is little acreage – couldn’t have that because they didn’t contract for it?”

While Perrault says contracting for hops is at “unprecedented levels,” he notes also that it can’t always address the issues of unforeseen expansions, of both breweries and their brands, or of every new startup operation. Thus, improved communication with suppliers is paramount to the long-term health of the industry.

But as a breeder, Perrault’s focus needs to be split between the business side of the industry as well as the creative side. And while he’s far from the face of the industry, Perrault’s resume as a hop breeder has earned him high praise from some of craft beer’s heaviest hitters.

Consider for a moment, when Perrault’s farm first secured acreage for Simcoe in 2000 (years after it was first conceived), the aromatic craze hardly resembled what it does today. In 2003, according to the Brewers Association, 25.3 percent of all hop acreage was devoted to aroma hops – like Simcoe. In 2013? 62.7 percent.

“They started Simcoe back in the early 90s when there was hardly any IPAs in America. And they bred that hop,” said Vinnie Cilurzo, owner of Russian River Brewing Co. “We as brewers really rely on these guys a lot for what the next flavor’s going to be.”

Russian River’s renowned Pliny the Elder was created around the Simcoe hop specifically.

“Jason has a bit of a hop whisperer quality to him,” added Cilurzo. “It seems like almost any variety that he’s involved with from an experimental standpoint seems to be pretty good.”

Tony Magee, owner of Lagunitas Brewing Co., has, to say the least, never been one to mince words. His thoughts?

“I grew up on my family’s hop farm, so I’ve been involved in one way, shape or form as long as I can remember,” he said. “This legacy aspect of our business is exceptionally meaningful. To know we are continuing in the footsteps of those before us as well as expanding their legacy for future generations certainly gives us a deeper meaning to what we do.”

So how does Perrault, or, more specifically, Select Botanicals, or, even more
specifically, every hop breeder in the world, take the pulse of the craft beer industry at large?

“That’s the million dollar question,” said Perrault. “You don’t know what’s going to be popular 10 years from now. When we released the crosses for Equinox and Mosaic, we didn’t know at the time [what the demand would be].”

As such, there’s a bit of a shotgun approach at the start of things.

“What we did do is make a diversity of crops. You have to be prepared for anything,” he said. “We were just kind of looking toward the future and saying, ‘What are the possibilities?’  That
allows you have as much a foundation
as possible.”

Most of that foundation, however, whether brought down by disease or less than acceptable quality, gets tossed and forgotten (a fate Simcoe narrowly escaped): Since 2008, Select Botanicals has only released three new hop varieties – Citra, Mosaic, and Equinox.

Perrault said he’s optimistic for the future though, both creatively and economically. Even if it means harvesting a bit of disappointment along the way.